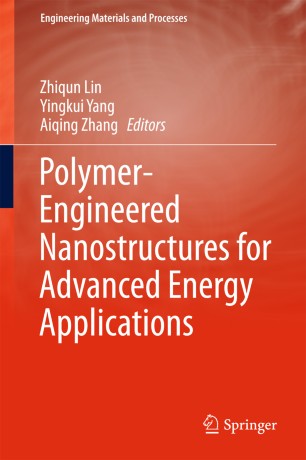 Part of the Engineering Materials and Processes book series (EMP)

This book provides a comprehensive overview of engineering nanostructures mediated by functional polymers in combination with optimal synthesis and processing techniques. The focus is on polymer-engineered nanostructures for advanced energy applications.

It discusses a variety of polymers that function as precursors, templates, nano-reactors, surfactants, stabilizers, modifiers, dopants, and spacers for directing self-assembly, assisting organization, and templating growth of numerous diverse nanostructures.

Combining state-of-the-art knowledge from polymer-guided fabrication of advanced nanostructures and their unique properties, it especially highlights the new, cutting-edge breakthroughs, future horizons, and insights into such nanostructured materials in applications such as photovoltaics, fuel cells, thermoelectrics, piezoelectrics, ferroelectrics, batteries, supercapacitors, photocatalysis, and hydrogen generation and storage. It offers an instructive and approachable guide to polymer-engineered nanostructures for further development of advanced energy materials to meet ever-increasing global energy demands.

Interdisciplinary and broad perspectives from internationally respected contributors ensure this book serves as a valuable reference source for scientists, students, and engineers working in polymer science, renewable energy materials, materials engineering, chemistry, physics, surface/interface science, and nanotechnology. It is also suitable as a textbook for universities, institutes, and industrial institutions.

Dr. Zhiqun Lin is currently Professor of Materials Science and Engineering at the Georgia Institute of Technology. He received his Ph.D. in Polymer Science and Engineering from the University of Massachusetts, Amherst in 2002. He did his postdoctoral research at the University of Illinois at Urbana-Champaign. He joined the Department of Materials Science and Engineering at the Iowa State University as an assistant professor in 2004 and was promoted to associate professor in 2010. He moved to Georgia Institute of Technology in 2011 and became a professor in 2014. His research interests include polymer-based nanocomposites, block copolymers, polymer blends, conjugated polymers, functional nanocrystals of different architectures, solar cells (in particular, perovskite solar cells, organic–inorganic hybrid solar cells, and dye sensitized solar cells), lithium ion batteries, hydrogen generation, hierarchically structured and assembled materials, and surface and interfacial properties. He is an associate editor for the Journal of Materials Chemistry A and an editorial advisory board member for Nanoscale.

Dr. Yingkui Yang is currently a professor at the School of Chemistry and Materials Science at South-Central University for Nationalities, China. He completed his Ph.D. degree in Polymer Chemistry and Physics at Huazhong University of Science and Technology in 2007. He has worked as a research fellow, postdoctoral fellow, and visiting professor at City University of Hong Kong and Hong Kong Polytechnic University over the past decade. He was also a visiting scholar at the University of Sydney (2010–2011) and Georgia Institute of Technology (2014–2015). He joined the School of Materials Science and Engineering at Hubei University in 2007 and was promoted to full professor in 2013. He then moved to South-Central University for Nationalities in 2016. His current research interests include surface/interface engineering of nanostructures, polymer-templated nanostructures, polymer-based nanocomposites, graphitic nanocarbons (in particular, graphene and carbon nanotubes) and their nanohybrids for actuators, electrochemical energy, electronics, environmental materials, and dielectric applications.

Dr. Aiqing Zhang is currently working as professor and dean of the School of Chemistry and Materials Science at South-Central University for Nationalities, China. He obtained his B.Sc. (1983), M.Sc. (1990), and Ph.D. (1998) from Huazhong University of Science and Technology, China. He served as a postdoctoral fellow (2000–2001) at Chonbuk National University, Korea. He worked at Shanxi Mining Institute (currently merged into Taiyuan University of Technology) from 1983 to 1987 and Wuhan Automotive Polytechnic University (now merged with Wuhan University of Technology) from 1990 to 1994. He then moved to South-Central University for Nationalities in 1998, where became a full professor. His scientific interests focus on the rational design and optimal synthesis of functional polymer materials for photosensitive, low-dielectric, and catalytic applications.