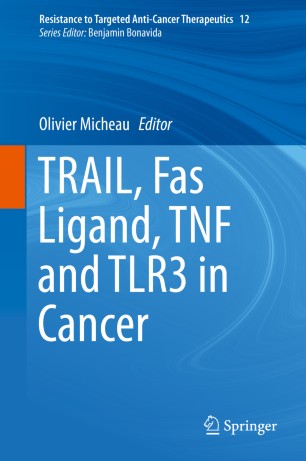 This volume provides the current understanding of death receptor's/TLR3 signaling regulation in cancer. Death receptors, including TRAIL-R1, TRAIL-R2, Fas and TNF-RI, owing to their ability to trigger apoptosis and to contribute to the elimination of cancer cells by the immune system have been considered, to variable extent, as important therapeutic targets for cancer therapy. But an increasing body of evidence suggests that some of these receptors may also contribute to tumorigenesis, or that new players such as TLR3 may be targeted for cancer therapy due to their ability to behave like death receptors.

Dr. Olivier Micheau is a research director of the INSERM (French National Institute of Health), UMR1231. He received his PhD in  Biochemistry and Molecular and Cellular Biology in 1999 from the University of Burgundy, France. He next moved as a post-doctoral fellow in Jurg Tschopp’s laboratory in Epalinges, Switzerland, from 1999 to 2003, where he elucidated the molecular mechanisms underlying TNFR1’s dual signaling ability. He described for the first time TNFR1 cytosolic pro-apoptotic complex II. In 2003 he joined the INSERM unit U517 headed by Professor E. Solary in Dijon, France, as an INSERM researcher. Member of several scientific councils, including INSERM CSS3 (2012-2016) and Fondation ARC pour la recherche sur le cancer, a French Charity (since 2015), he is also Associate Editor of the British Journal of Pharmacology since 2012. His scientific interest focuses on TRAIL receptor signaling and its use in cancer therapy.