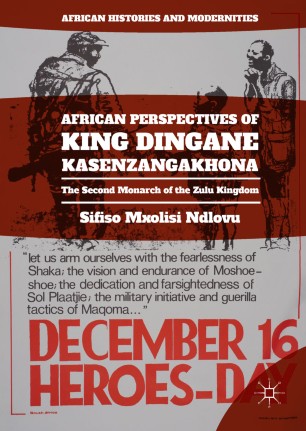 The Second Monarch of the Zulu Kingdom

This book examines the active role played by Africans in the pre-colonial production of historical knowledge in South Africa, focusing on perspectives of the second king of amaZulu, King Dingane. It draws upon a wealth of oral traditions, izibongo, and the work of public intellectuals such as Magolwane kaMkhathini Jiyane and Mshongweni to present African perspectives of King Dingane as multifaceted, and in some cases, constructed according to socio-political formations and aimed at particular audiences. By bringing African perspectives to the fore, this innovative historiography centralizes indigenous African languages in the production of historical knowledge.

Sifiso Mxolisi Ndlovu is an Executive Director at the South African Democracy Education Trust, Professor of History at the University of South Africa, and a member of UNESCO’s Scientific Committee on the General History of Africa multi-volume series.

“This book makes a considered response to fields that reify the colonial master narratives of Empire today. Over a spread of deftly argued chapters, each with its own lens that draws from disparate sources of the oral tradition and journalism, it provides a compelling case for an alternative historiography of King Dingane, with a locus that is at once in the south and indigenous. Ndlovu has made an invaluable, timely contribution to the recent tidal waves of decoloniality, in South Africa and abroad.” (Kgomotso Michael Masemola, Full Professor of English Literature, University of South Africa)
Buy options