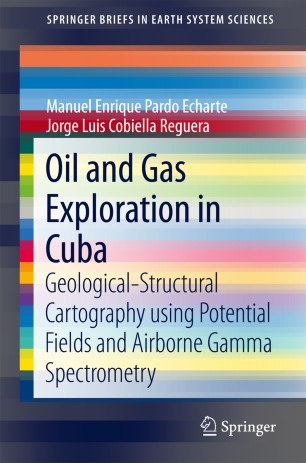 Oil and Gas Exploration in Cuba

A summary of the results achieved in the geological-structural mapping, by potential fields and airborne gamma spectrometry data, of the units of igneous and metamorphic rocks in the western regions (Havana-Matanzas), central (Cienfuegos, Villa Clara-Sancti Spiritus) and central-eastern (Camagüey-Las Tunas-Holguín) of Cuba is presented. In addition, the structural- tectonic regionalization with hydrocarbon exploration purposes, focusing mapping of possible new oil-gas targets in the regions of Land Blocks 9, 23 and 17-18 are detailed in this volume. In certain case study locations (Majaguillar, North Motembo, Guamutas and Maniabón) reconnaissance work by a profile of Redox Complex (complex of unconventional geophysical-geochemical exploration techniques) was performed with positive results.

In an attempt to contribute to the geological-structural mapping of the metamorphic massif Isla de la Juventud, with emphasis on acid magmatism, the gravi-magnetometric data is used. According to the results, the presumed post metamorphic granitic bodies of low density are located, mainly, in the central and southwestern part of the massif. The granitic bodies apparently were introduced through the system of longitudinal faults (syn metamorphic) and transverse (post metamorphic) at the end of the process multyfolding and metamorphism of the massif sequences, taking a leading role the deep longitudinal fracture zones of sublatitudinal direction in the central and southern part of the massif. On the map of the magnetic field vertical derivative  the anomalies, basically, reflected the direction and limits of the folded tectonic structure, the development area of ​​ volcanogenic rocks, the presumed development zones of migmatitic rocks and tectonised rocks in North and center of the massif, respectively, and the prevailing direction of the main tectonic dislocations.