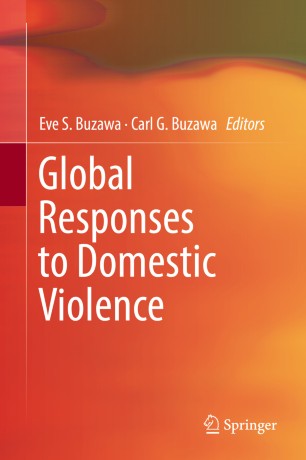 This volume addresses the varied response to domestic violence in a comparative, international context. The chapters are laid out in a consistent format, to cover: the nature of the domestic violence problem, theoretical explanations, the criminal justice response, as well as health care and social service interventions in each country. The intent of the book is to provide an introduction to the attitudes and responses to domestic violence in various regions, to provide meaningful comparisons and share information on best practices for different populations and regions.
There are considerable variations to domestic violence approaches across cultures and regions. In some places, it is considered a “private” or “family” matter, which can help it perpetuate. At the same time, the United States’ approach to domestic violence has been criticized by some as being too focused on the criminal justice system, rather than other types of interventions which aim to keep families intact.
This comprehensive work aims to highlight innovative approaches from several regions, important cultural sensitivities and concerns, and provide analysis to identify the strengths and weakness of various approaches. This work will be of interest to researchers in criminology and criminal justice, as well as related fields who deal with domestic violence and violence against women, including sociology and social work, and international justice. Practitioners and policymakers will also find it informative.

Eve S. Buzawa is a Professor and Chairperson of the Department of Criminal Justice and Criminology at the University of Massachusetts Lowell. She received her Bachelor of Arts degree from the University of Rochester and her Master's and Doctoral degrees from the School of Criminal Justice, Michigan State University. Dr. Buzawa’s research interests and publications encompass a wide range of issues pertaining to policing, domestic violence, and violence against women. She has authored and edited numerous books and monographs. Recent publications include Violence against Women in Families and Relationships: Making and Breaking Connections, a 4 volume set, (Co-Editorwith Evan Stark, 2009), and the fourth edition of her book, Domestic Violence: The Criminal Justice Response is currently is forthcoming. She has also served as a Principal Investigator on several federally funded research projects as well as directing numerous state funded research and training projects.