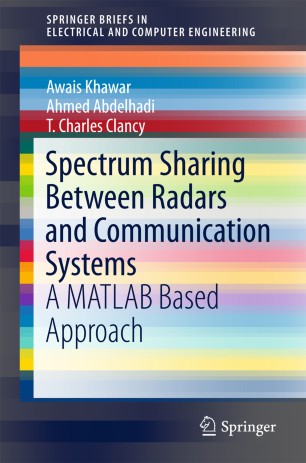 A MATLAB Based Approach

Dr. Awais Khawar is a Senior Engineer at Federated Wireless. He received his B.S. in telecommunication engineering from the National University of Computer and Emerging Sciences, Peshawar, Pakistan (2007), M.S. in electrical engineering from the University of Maryland at College Park (2010), and Ph.D. in electrical engineering from Virginia Tech (2015). At the University of Maryland his research focused on the security aspect of spectrum sensing in cognitive radio networks. His work on spectrum sensing security has featured in the IEEE COMSOC Best Readings in Cognitive Radio. At Virginia Tech his research focused on spectrum sharing, security, optimization, and resource allocation for coexisting wireless communication and radar systems. Dr. Khawar has co-authored more than 20 peer-reviewed technical publications. He is also co-author of the book MIMO Radar Waveform Design for Spectrum Sharing with Cellular Systems (Springer, 2016).

Dr. Ahmed Abdelhadi is a Research Assistant Professor at Virginia Tech. He received his Ph.D. in Electrical and Computer Engineering from the University of Texas at Austin in December 2011. He was a member of Wireless Networking and Communications Group (WNCG) during his Ph.D. In 2012, he joined Bradley Department of Electrical and Computer Engineering and Hume Center for National Security and Technology at Virginia Tech. His research interests are in the areas of resource allocation optimization, radar and wireless systems, and security. Dr. Abdelhadi has coauthored more than 50 journal and conference papers and 5 books in these research topics.

Dr. T. Charles Clancy is an Associate Professor of Electrical and Computer Engineering at Virginia Tech and directs of the Hume Center for National Security and Technology. Prior to joining Virginia Tech in 2010, he served as a senior researcher at the Laboratory for Telecommunications Sciences, a defense research lab at the University of Maryland, where he led research programs in software-defined and cognitive radio. Dr. Clancy received his B.S. in Computer Engineering from the Rose-Hulman Institute of Technology, M.S. in Electrical Engineering from the University of Illinois, and his Ph.D. in Computer Science from the University of Maryland. He is a Senior Member of the IEEE and has over 150 peer-reviewed technical publications. His current research interests include cognitive communications and spectrum security.