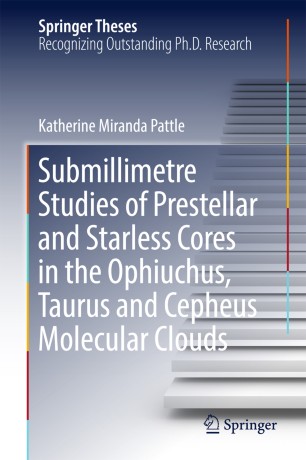 Submillimetre Studies of Prestellar and Starless Cores in the Ophiuchus, Taurus and Cepheus Molecular Clouds

This thesis presents studies of the starless core populations of three nearby molecular clouds made as part of the James Clerk Maxwell Telescope Gould Belt Survey. These studies combine observations made using the SCUBA-2 submillimetre camera with data from several other instruments, including the Herschel Space Observatory, to identify and characterise starless cores in the Ophiuchus, Taurus and Cepheus molecular clouds. The temperatures, masses and stability against collapse of the starless cores are measured, the latter through detailed virial analysis, including a determination of the external pressure on the cores. The book illustrates core stability on the “virial plane”, in which core stability is plotted against core confinement mode, showing that starless cores are typically confined by external pressure rather than self-gravity. It also presents an analytical model of the evolution of starless cores in the “virial plane”, demonstrating that a pressure-confined starless core may evolve due to virial stability rather than gravitational collapse, which means that a core can only be definitively considered to be prestellar if it is gravitationally bound.