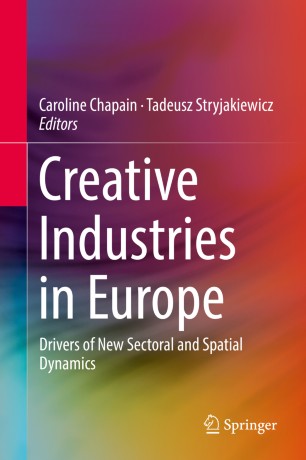 This book demonstrates how the creative industries are driving new sectoral and spatial dynamics in European cities, regions, and countries, and how these may be influenced by international and global dynamics. It takes a purposeful geographical approach to the study of the creative industries across various Western, Central and Eastern European contexts since the 2008-2009 recession. Despite the growing research looking at the development of the creative industries in the last 15 years, there are still gaps in the coverage of what is happening in Central and Eastern Europe compared to Western Europe. This book addresses these gaps in two parts focusing on particular geographical scales and creative processes: local interplay between sector and space and the role of the creative industries in  regional and national economies after the crisis. The book presents original analyses of the post-crisis environment, and novel data on topics such as the role of institutions in the regulation of the fashion industry in global cities,  the impact of clustering on film innovation, location patterns of art galleries, regional specialisations and paths of professional carriers in creative industries.

Caroline Chapain (Business School, University of Birmingham, UK) is a lecturer at the Business School, University of Birmingham where she has been working since 2005. Prior to this, Caroline studied and worked in France and in Canada. From 2002 to 2005, she worked as a research advisor on public finance, economic development, and cultural issues for the Montreal Metropolitan Planning Organization. She has expertise in local and regional economic development, particularly around the area of creative industries, clusters, creativity and innovation, digital cities, economic restructuring and public policies. Caroline has been contributing to and leading on a variety of research projects on these topics for institutions like Birmingham City Council, West Midlands in Europe, ESRC, AHRC, NESTA, the British Council, etc. in the last 12 years. Since 2005, she has been more and more interested in exploring the way creative industries emerge, operate and develop at the local and regional levels in the UK and in Europe. Recently, she has been involved in various projects exploring the links between creative practices and online media as well as the development of creative systems for the Arts and Humanities Research Council (AHRC) Connected Communities Programme in the UK: one looking at ‘Community film making and cultural diversity.’, one looking at ‘Complexity theory and the creative economy’ and a large project looking at 'Community, Media and Creative citizenship’. Caroline co-chairs with Roberta Comunian and Nick Clifton the Regional Studies Association Network on Creative Regions in Europe. Caroline has published various peer-reviewed journal articles, journal special issues, book chapters, research reports as well as co-edited a book on ‘The Recession and beyond: Local and Regional Responses to the Recession’ published with Routledge in 2011.

Tadeusz Stryjakiewicz (Institute of Socio-Economic Geography and Spatial Management, Adam Mickiewicz University in Poznań, Poland) is Professor of economic geography and Head of the Department of Regional Policy and European Integration at Adam Mickiewicz University in Poznań (Poland). He was a recipient of research fellowships at Johann Wolfgang Goethe University, Frankfurt am Main and at the School of Slavonic and East European Studies at the University of London. He was also a visiting lecturer at Erasmus University in Rotterdam (1991). His main research interests focus on regional and local development, urban and regional policy, organisation and dynamics of socio-economic spaces (including the creative industries), and contemporary urban transformations. He participated in a few international research projects, such as ACRE [Accommodating Creative Knowledge. Competitiveness of European Metropolitan Regions within the Enlarged Union] project, implemented under the 6th Framework Programme of the European Union, the CREA.RE - Creative Regions project (Interreg IVC) and the COST Action “Cities regrowing smaller - fostering knowledge on regeneration strategies in shrinking cities across Europe”. He is the author (and co-author) of more than 240 research publications (among which a three-volume monograph on the creative sectors in the Poznan metropolitan area), many expert reports (e.g. for Regional Innovation Strategy, Development Strategy of the Wielkopolska Voivodeship, Development Strategy of the City of Poznan, Local Action Plan for Creative Sector in Poznan and Wielkopolska) and member of many research councils and institutions.