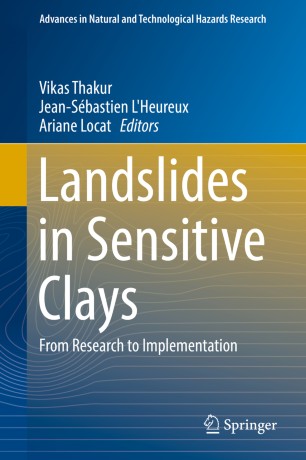 From Research to Implementation

This book gathers the most recent scientific research on the geological, geotechnical and geophysical aspects of slope failure in sensitive clays. Gathering contributions by international experts, it focuses on understanding the complete and practical spectrum of challenges presented by landslides in such complex materials. Based on sound and validated research results, the book also presents several recommendations that could be implemented in the guidelines or code-of-practice. These recommendations cover topics including the characterization and behavior of sensitive clays; the pre-failure, failure and post-failure stages of sensitive clays; mapping and identification methods; climate change; hazard assessment; and risk management.

Sensitive clays are known for their potential for causing large landslides, which pose a serious risk to human lives, infrastructure, and surrounding ecosystems within their reach. This has been demonstrated by the recent catastrophic landslides in e.g. Sørum (2016), Skjeggestad (2015), Statland (2014), Byneset (2012), St-Jude (2010), Lyngen (2010) and Kattmarka (2009). The 2015 collapse of the Skjeggestad Bridge in Norway – which was due to a landslide in sensitive clay – alone costs millions of dollars in repairs. Recently, efforts are being made to increase society’s ability to cope with such landslide hazards. Geoscientists are now expected to provide input to the agencies responsible for landslide-risk preparedness. In other words, geoscientists’ role is not only to act as technologists to establish new theories, but also to go the extra mile to implement them in practice, so as to find meaningful solutions to geotechnical problems.