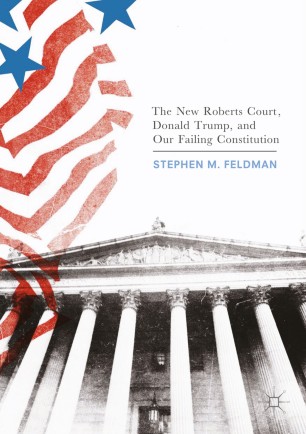 The New Roberts Court, Donald Trump, and Our Failing Constitution

This book traces the evolution of the constitutional order, explaining Donald Trump’s election as a symptom of a degraded democratic-capitalist system. Beginning with the framers’ vision of a balanced system—balanced between the public and private spheres, between government power and individual rights—the constitutional order evolved over two centuries until it reached its present stage, Democracy, Inc., in which  corporations and billionaires wield herculean political power. The five conservative justices of the early Roberts Court, including the late Antonin Scalia, stamped Democracy, Inc., with a constitutional imprimatur, contravening the framers’ vision while simultaneously claiming to follow the Constitution’s original meaning. The justices believed they were upholding the American way of life, but they instead placed our democratic-capitalist system in its gravest danger since World War II. With Neil Gorsuch replacing Scalia, the new Court must choose: Will it follow the early Roberts Court in approving and bolstering Democracy, Inc., or will it restore the crucial balance between the public and private spheres in our constitutional system?

Stephen M. Feldman is Visiting Scholar at Harvard Law School, USA, and has been the Jerry W. Housel/Carl F. Arnold Distinguished Professor of Law and Adjunct Professor of Political Science at the University of Wyoming, USA, since 2002. He has authored four scholarly books on Constitutional law and American legal thought, edited an anthology on law and religion, and written more than sixty articles and essay contributions on law, politics, and jurisprudence.