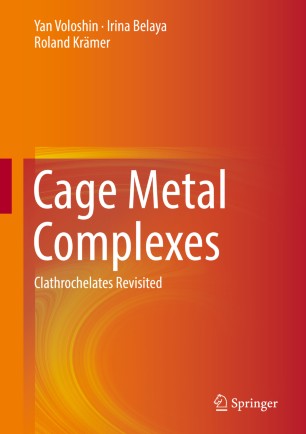 This fundamental book presents the most comprehensive summary of the current state in chemistry of cage metal complexes. After their previous book “The Encapsulation Phenomenon” (ISBN 978-3-319-27737-0) the authors in this book focus on the encapsulation of metal ions by different types of three-dimensional mono- and polynucleating caging ligands. Within these cage metal complexes, (metal) ions can be isolated from external factors.
The book provides both a classification of the cage compounds and summaries of synthetic approaches. On that basis the authors then describe the unique chemical and physical properties and the resulting reactivity of the cage compounds, as well as practical and potential applications as potent topological drugs and prodrugs, antifibrillogenic agents, radiodiagnostic and radiotherapeutic compounds, paramagnetic probes, single-molecule magnets, electrocatalysts for hydrogen production, (photo)electronic devices, and many more.
Readers will find a well-structured and concise overview, with particular emphasis on a review of synthesis and reactivity of various cage metal complexes, summarizing over 400 literature references, clearly presented in over 300 color schemes and figures.