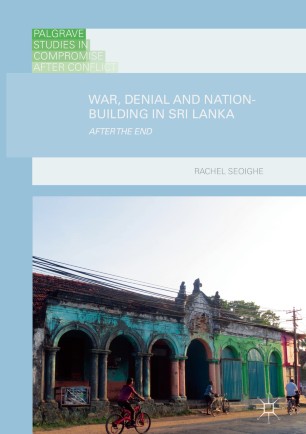 This book begins from a critical account of the final months of the Sri Lankan civil war, tracing themes of nationalism, discourse and conflict memory through this period of immense violence and into its aftermath. Using these themes to explore state crime, atrocity and its denial and representation, Seoighe offers an analysis of how stories of conflict are authored and constructed. This book examines the political discourse of the former Rajapaksa government, highlighting how fluency in international discourses of counter-terrorism, humanitarianism and the ‘reconciliation’ expected of states transitioning from conflict can be used to conceal and deny state violence.
Drawing on extensive interviews with activists, academics, politicians, state representatives and international agency staff, and three months of observation in Sri Lanka in 2012, Seoighe demonstrates how the Rajapaksa government re-narrativised violence through orchestrated techniques of denial and mass ritual discourse. It drew on and perpetuated a heightened majoritarian Sinhala-Buddhist nationalism which consolidated power under Sinhalese political elites, generated minority grievances and, in turn, sustained the repression and dispossession of the Tamil community of the Northeast. A detailed and evocative study, this book will be of special interest to scholars of conflict studies, political violence and critical criminology.

Rachel Seoighe is a Criminologist and Socio-Legal Scholar and a Lecturer in Criminology (Human Rights and Criminal Justice) at Middlesex University’s Department of Criminology and Sociology, UK.