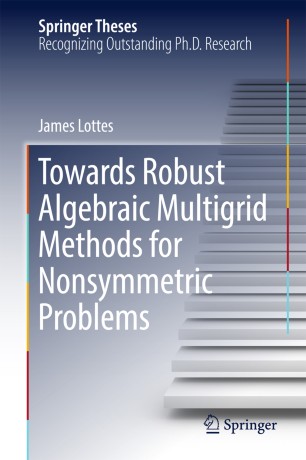 This thesis presents a rigorous, abstract analysis of multigrid methods for positive nonsymmetric problems, particularly suited to algebraic multigrid, with a completely new approach to nonsymmetry which is based on a new concept of absolute value for nonsymmetric operators.
Multigrid, and in particular algebraic multigrid, has become an indispensable tool for the solution of discretizations of partial differential equations. While used in both the symmetric and nonsymmetric cases, the theory for the nonsymmetric case has lagged substantially behind that for the symmetric case. This thesis closes some of this gap, presenting a major and highly original contribution to an important problem of computational science.
The new approach to nonsymmetry will be of interest to anyone working on the analysis of discretizations of nonsymmetric operators, even outside the context of multigrid. The presentation of the convergence theory may interest even those only concerned with the symmetric case, as it sheds some new light on and extends existing results.