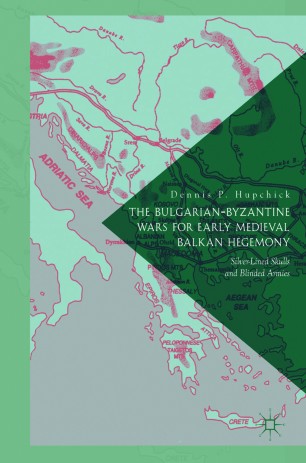 This book provides an interpretive narrative of the wars fought by Bulgaria against the Byzantine Empire for dominant control of the Balkan Peninsula during the early medieval era.  Over a span of two centuries, from the early ninth through the early eleventh, and under the leadership of the Bulgarian rulers Krum, Simeon I, and Samuil, those conflicts evolved from simple confrontations for territorial possession into a life-or-death struggle for imperial precedence within the Orthodox world then emerging in Eastern Europe—a struggle that the Bulgarians ultimately lost.  The primary focus is on Bulgaria, rather than Byzantium, and an effort is made to provide a historically reliable chronology of the assorted campaigns.  The various belligerents’ military organizations, defensive technologies, armaments, and tactics are surveyed in an introduction to the main narrative.  A prelude chapter sets the stage for the hegemonic conflict, which was divided into three distinct phases by interludes of relative peace between the contending parties, during which Bulgaria’s domestic, foreign, and cultural developments shaped the nature and conduct of the fighting in each successive phase.