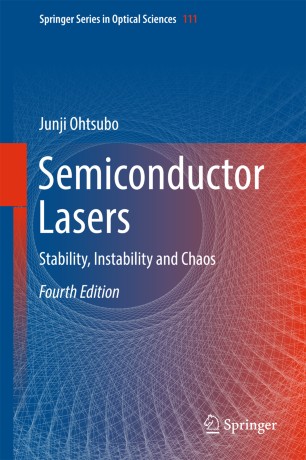 This fourth edition has been significantly expanded to reflect the latest developments. The fundamental theory of laser chaos and the chaotic dynamics in semiconductor lasers are discussed, but also for example the method of self-mixing interferometry in quantum-cascade lasers, which is indispensable in practical applications.

Junji Ohtsubo received the B.S. degree in electronics from the Kyushu Institute of Technology in 1973, and the M.S. and Ph.D. degrees in electronics from Hokkaido University in 1975 and 1978, respectively. In 1978, he joined the Mechanical Engineering Laboratory, MITI, Japan. During 1981–1982, he was a Research Associate at the Institute of Optics, University of Rochester. He joined Shizuoka University, Shizuoka, Japan, as an Associate Professor in 1985 and was a Professor at the Department of Systems Engineering from 1993. He is now a Professor Emeritus of Shizuoka Univeristy. His current research interests are nonlinear dynamics in optics, chaos in semiconductor lasers, optical information processing and computing, optical security systems, statistical optics, speckle, and optical metrology.