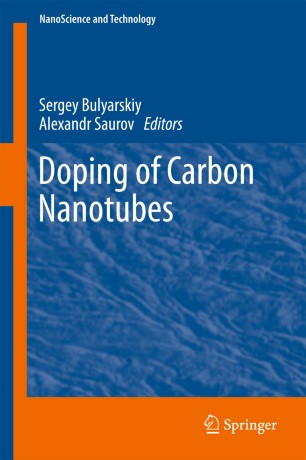 This book addresses the control of electronic properties of carbon nanotubes. It presents thermodynamic calculations of the formation of impurities and defects in the interaction of nanotubes with hydrogen, oxygen, nitrogen and boron, based on theoretical models of the formation of defects in carbon nanotubes. It is shown that doping and adsorption lead to changes in the electronic structure of the tubes as well as to the appearance of impurity states in the HOMO-LUMO gap. The book presents examples of specific calculations for doping of carbon nanotubes with oxygen, hydrogen, nitrogen and boron, together with numerous experimental results and a comparison with the author’s thermodynamic calculations. Possible directions of the technological processes of optimization are pointed out, as well as the perspectives of p-n-transition creation with the help of carbon nanotube arrays.

The results presented were derived from the physics of the processes and a theoretical model of the technological processes. Though a wealth of empirical information on doping nanotubes has been accumulated in the scientific literature, what is lacking is a theoretical model for their analysis. As such, the book develops a thermodynamic model of the self-organization of structural elements in multicomponent systems – including carbon nanotubes, clusters and precipitates in condensed matter – and subsequently adapts it to the doping of carbon nanotubes. This approach allows readers to gain a far deeper understanding of the processes of doping carbon nanotubes.

Sergey Bulyarskiy received his PhD in 1976 and his doctor of science degree in 1989, becoming a professor in 1990. From 1991 to 2014 he served as the vice-rector of Ulyanovsk State University, Russia, and Head of the Department. Since 2014 he has been the Head of the Laboratory of Microelectronics Nanotechnologies, an Institute of the Russian Academy of Sciences. He was elected a Corresponding Member of the Academy of Sciences of the Republic of Tatarstan and was awarded various science prizes in Russia. Prof. Bulyarskiy currently pursues research on the theoretical foundations of nanotechnologies and nanoelectronics, physics, nanoelectronic devices, diagnostic quality and reliability prediction. He has obtained important results on the development of thermodynamic and kinetic models for the self-organization of nanoelements in multicomponent systems of semiconductors and carbon. He is currently working at the Russian Academy of Sciences in Moscow, studying problems in carbon nanotubes and grapheme. S. Bulyarskiy directs the school of young scientists in “Physical problems of nanotechnology, nanoelectronics components and microstructures” and is Chairman of the Organizing Committee of the annual International Conference “Opto-, nanoelectronics, nanotechnology and micro.” He has authored more than 200 scientific papers and 20 monographs.

Alexander Saurov received his PhD in 1988 and his Doctor of Science degree in 1999, becoming a professor in 2001 and Corresponding Member of the Russian Academy of Sciences in 2008, elected a Full Member of the Russian Academy of Sciences in 2016. Since 2009 he has been the Director of the Institute of Microelectronics Nanotechnologies of the Russian Academy of Sciences (INME RAS), Moscow. A specialist for integral circuit, micro- and nanosystems, he has authored 161 scientific publications and holds 40 patents. Prof. Saurov’s main findings concern: the development of technologies of ultra-small sizes of integrated structures, very-large-scale integration (VLSI) and microsystems on the basis of non-lithographic constructive-technological methods of autoshaping, technologies of self-aligned integrated transistor configurations and integrated microsensors, low-swirl injectors (LSIs) with ultra-low energy, and microsensors on the basis of silicon-carbon nanotechnologies. He is a senior editor of the journal “Nanoindustry” and a member of the editorial board of the magazine “Microsystems engineering”.