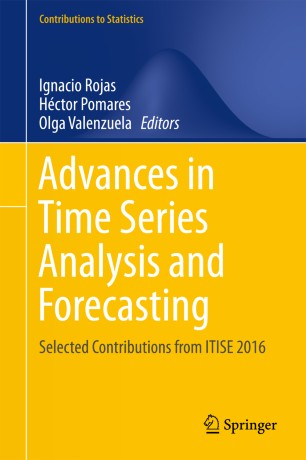 The series of ITISE conferences provides a forum for scientists, engineers, educators and students to discuss the latest ideas and implementations in the foundations, theory, models and applications in the field of time series analysis and forecasting.  It focuses on interdisciplinary and multidisciplinary rese

Ignacio Rojas is a full professor at the Department of Computer Architecture and Computer Technology, University of Granada, Spain. Throughout his research career, he has served as a principal investigator or participated in more than 20 research projects obtained in competitive calls including projects of the European Union, the I+D+I Spanish National Government and projects Excellence of the Ministry of Innovation, Science and Enterprise Junta de Andalucía. He has published more than 210 scientific contributions reflected in the database ISI Web of Knowledge, thereof 87 articles in JCR-indexed journals.

Héctor Pomares has been a full professor at the University of Granada in Spain since 2001. He has published more than 50 articles in JCR-indexed journals and contributed with more than 150 papers in international conferences. He has led or participated in 15 national projects, one autonomic R&D Excellence project and 13 contracts signed for

innovative research through the University of Granada Foundation Company and the Office of Transfer of Research Results. He has made 6 stays longer than one month in prestigious research centers outside of Spain, all of them with a competitive nature. He is a member of the editorial board of the Journal of Applied Mathematics (JCR-indexed) and is the coordinator of the Official Master's Degree in Computer & Network Engineering at the University of Granada.

ar methods, evolutionary computation and bioinformatics. She has made several stays longer than one month in prestigious research centers outside of Spain, all of them with a competitive nature. She has published more than 67 contributions reflected in the database ISI Web of Knowledge.