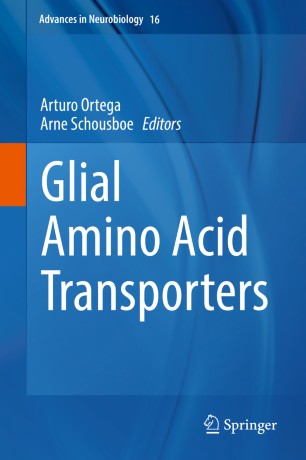 Part of the Advances in Neurobiology book series (NEUROBIOL, volume 16)

Our current knowledge of the role of macroglia in the physiology of the nervous system has been shaped on by both the established role of oligodendrocytes and Schwann cells in the propagation of the action potential and by the concept of the tripartite synapse.

Different points of view of the involvement and contribution of glial transporters are presented in this volume, and the contrast of these interpretations invites the readers to broaden their interest of membrane transporters beyond the chapters of this book. No intention was made to provide a certain order to the chapters of the book; in fact any of them can be read independently.

We want to express our appreciation to the contributors for their enthusiasm in the preparation of their excellent chapters that will certainly provide a fresh perspective of the exponential accumulation of knowledge that has been published in the last few years and unequivocally changing the concept of glial physiology.

It is our hope that this book provides a major input to the fascinating field of membrane transporters as fundamental proteins for the establishment of a better understanding of glia-neuron interactions.

Arturo Ortega holds a B.Sc. degree in Chemistry from The National Autonomous University of Mexico  (1985),  a M. Sc. in Physiology  from Cinvestav, Mexico City  (1985) and a Ph.D. in Neurobiology (1991) from The Weizmann Institute of Science in Rehovot, Israel, under the supervision of the late Vivian I. Teichberg with whom he started to work in glutamate-mediated signaling in glia cells.   After spending 2 years in the Department of Biochemistry in Cinvestav as an Assistant Professor, he moved to the Department of Genetics and Molecular Biology where he was promoted to Associate Professor in 1997 and in 2004 to the rank of Professor.  More recently (2013) he moved to the Department of Toxicology where he established a Neurotoxicology Lab. He has been Visiting Professor in the Institute of Neuroscience of the Autonomous University of Barcelona (2008)  and in the Catholic University of Louvain (2014-2015). He  served as the Department Chair (Genetics and Molecular Biology). He has been working on glutamate receptors and transporters focusing on signaling, gene expression regulation at the transcriptional and translational levels for more than 30 years.  He has published over 100 research articles and mentored 33 PhD and 67 MSc students. He is currently member of the Editorial Board of the two major Neurochemistry journals and of the book series Advances in Neurobiology.

Arne Schousboe obtained his M.Sc. in biochemistry from The University of Copenhagen in 1968 at a time where an M. Sc. was considered equivalent to a Ph.D. He subsequently (1978) earned his Doctor of Science (D. Sc.) degree also from University of Copenhagen. After a post-doc period with Dr. Eugene Roberts at the Department of Neuroscience, City of Hope National Medical Center in Los Angeles 1972-1973 he came back to the University of Copenhagen to resume a tenured position as Assoc. Prof. at the Medical Faculty. In 1990 he moved to the Royal Danish School of Pharmacy, Copenhagen as a Full Professor of biochemistry and has remained in this position also when this Institution changed to become an independent University and subsequently a Faculty of Pharmaceutical Sciences which lately was incorporated in the Faculty of Health and Medical Sciences still at the University of Copenhagen . He has served as the Department Chair from 2005 to 2010 and is now part time Professor of Neuropharmacology in Department of Drug Design and Pharmacology at University of Copenhagen. He has been working on astrocyte function focusing on amino acid neurotransmission during the past more than 4o years and is currently engaged in studies of glutamate and GABA homeostasis and metabolism. He has published over 550 papers on these and related topics. He has served on the Editorial Board on numerous neuroscience journals over the years and is currently the Editor-in-Chief of Neurochemical Research and Editor of the book series Advances in Neurobiology