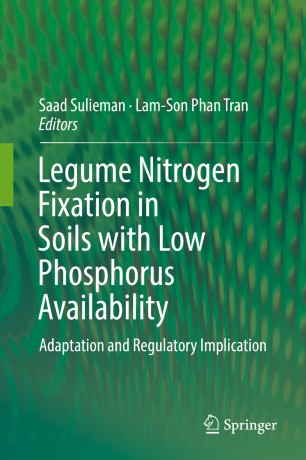 This thoughtful and provocative book provides a concise, up-to-date presentation of how current and projected future phosphorus scarcity will affect legume growth and their symbiotic nitrogen-fixing capabilities. It is a timely examination of the physiological and molecular responses of nodules to phosphorous deficiency in attempt to identify common principles. Students and researchers in the many disciplines related to crop productivity will find this title an exciting contribution in the area of plant stress physiology. The knowledge in this volume can also aid plant breeders, particularly through new methods of genetic engineering, in developing unique and adaptive cultivars with higher symbiotic efficiency.
The awareness of the rapidly rising world population must translate into a parallel increase in agricultural production in order to sustain the growing population both now and in the future. Hence, the demand for food crops to produce proteins and vegetable oil for human consumption is going to increase considerably during the coming years. The essential role of legumes in agriculture is well-recognized, given the abundant levels of proteins and oils found in plants along with their enormous contribution to the sustainability of agricultural systems and human health. The capacity of legumes to fix nitrogen (N2) in partnership with rhizobia provides an input-saving and resource-conserving alternative, thereby reducing the need for chemical fertilizers while enhancing overall crop productivity. The use of N2-fixing legumes to produce plant proteins results in a substantial decrease in the consumption of fossil fuels and therefore also in the agricultural effects to global warming. However, a major constraint to legume production is low soil phosphorus (P) availability, considering that an overwhelming majority of the world’s soils are classified as P-deficient. Low-P availability is especially problematic for legumes, since legume nodules responsible for N2 fixation have a high P requirement. Therefore, this book explains how nodule N2 fixation responds to low P availability, which is crucial for improving legume production and maintaining agricultural sustainability in the context of the global P crisis.

Dr. Lam-Son Phan Tran is Head of the Signaling Pathway Research Unit at RIKEN Center for Sustainable Resource Science, Japan. He obtained his M.Sc. in Biotechnology in 1994 and Ph.D. in Biological Sciences in 1997, from Szent Istvan University, Hungary. After doing his postdoctoral research at the National Food Research Institute (1999-2000) and the Nara Institute of Science and Technology of Japan (2001), in October 2001, he joined the Japan International Research Center for Agricultural Sciences to work on the functional analyses of transcription factors and osmosensors in  Arabidopsis plants under environmental stresses. In August 2007, he moved to the University of Missouri-Columbia, USA as a Senior Research Scientist to coordinate a research team working to discover soybean genes to be used for genetic engineering of drought-tolerant soybean plants. His current research interests are elucidation of the roles of phytohormones and their interactions in abiotic stress responses, as well as translational genomics of legume crops with the aim to enhance crop productivity under adverse environmental conditions. He has published over 110 peer-reviewed papers with more than 80 research and 30 review articles, contributed 8 book chapters to various book editions published by Springer, Wiley-Blackwell, and American Society of Agronomy, Crop Science Society of America and Soil Science Society of America. He has also edited 7 book volumes for Springer, including this one.

Dr. Saad Sulieman graduated from the University of Khartoum in 1998 with distinction in Agronomy and was awarded many prizes for being the best graduate. He joined the Department of Agronomy, Faculty of Agriculture, University of Khartoum as a Teaching Assistant in 1999. Subsequently, he obtained a M.Sc. in Crop Sciences at the University of Khartoum (2002) and then a Ph.D. in Agricultural Chemistry (2009) at Georg-August University of Göttingen, Germany with a scholarship from the German Academic Exchange Service (DAAD). During his Ph.D. pursuit, he focused on investigating the physiological characterization of symbioses contrasting tolerance in nitrogen fixation to major soil limitations. After completing his Ph.D., he continued to work as a Research Assistant at the same institute for a year and a half. He also worked as a Postdoctoral Fellow at RIKEN Center for Sustainable Resource Science (CSRS), Yokohama, Japan for one year (2013) with a Postdoctoral Fellowship from the Japan Society for the Promotion of Science (JSPS). Recently, he has been awarded a Georg Forster Research Fellowship for experienced researchers from the Alexander von Humboldt (AvH) Foundation. Throughout his career, he has taught many students to the level of B.Sc. and M.Sc. Sulieman was promoted to Lecturer in 2005, Assistant Professor in 2009, and Associate Professor in 2013. Between 2014 and 2016, he held the position of Head of Department of Agronomy, University of Khartoum. Throughout the years of his research career, he has attended many domestic and international meetings, conferences, seminars and workshops. He has authored or co-authored more than 35 publications. The main focus of his research is the field of molecular plant physiology of abiotic stress.