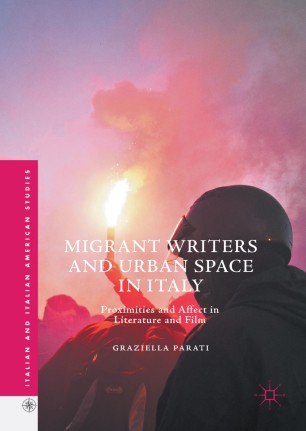 Proximities and Affect in Literature and Film

This book is about migrants’ lives in urban space, in particular Rome and Milan. At the core of the book is literature as written by migrants, members of a “second generation,” and a filmmaker who defines himself as native. It argues that the narrative authored by migrants, refugees, second generation women, and one “native Italian” perform a reparative reading of Italian spaces in order to engender reparative narratives. Eve Sedgwick wrote about our (now) traditional way of reading based on unveiling and on, mainly, negative affect. We are trained to tear the text apart, dig into it, and uncover the anxieties that define our age. Migrants writers seem to employ both positive and negative affects in defining the past, present, and future of the spaces they inhabit. Their recuperative acts of writing, constitute powerful models of changes in/on place. As they look at Italian exclusionary spaces, they also rewrite them into a present whose transitiveness allows to imagine a process of citizenship and belong constructed from below.

Graziella Parati is Paul D. Paganucci Professor of Italian Language and Literature at Dartmouth College, USA. Her previous monographs include Italy and the Cultural Politics of WWI (2016), New Perspectives in Italian Cultural Studies (2012) and The Cultures of Italian Migration (2011).