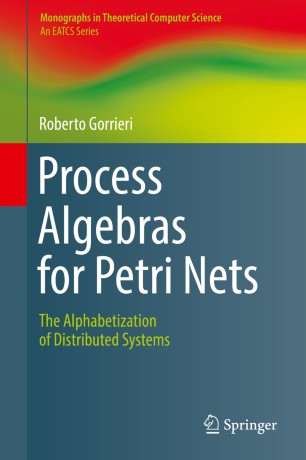 The Alphabetization of Distributed Systems

This book deals with the problem of finding suitable languages that can represent specific classes of Petri nets, the most studied and widely accepted model for distributed systems. Hence, the contribution of this book amounts to the alphabetization of some classes of distributed systems. The book also suggests the need for a generalization of Turing computability theory.

It is important for graduate students and researchers engaged with the concurrent semantics of distributed communicating systems. The author assumes some prior knowledge of formal languages and theoretical computer science.

Roberto Gorrieri is a professor in the Università di Bologna. His research and teaching interests include theoretical computer science, particularly concurrency, the foundations of software engineering, and the foundations of security. He coauthored the textbook "Introduction to Concurrency Theory: Transition Systems and CCS" in 2015, and he has authored over 140 formal academic publications. He received his PhD in Computer Science from the Università di Pisa.

“Gorrieri's monograph is truly illuminating and has fully met my high expectations regarding content, originality, technical rigor, and presentation. It should be on the reading list of every doctoral student in concurrency theory and also of those research scholars who have some grounding in concurrency theory but are not experts in both Petri nets and process algebras.” (Gerald Lüttgen, Mathematical Reviews, April, 2018)
Buy options