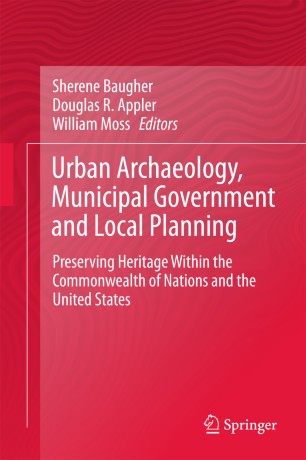 Preserving Heritage within the Commonwealth of Nations and the United States

This book will explore the experiences, both positive and negative, of small and large cities globally. We have examined programs in the Commonwealth of Nations (formerly known as the British Commonwealth) and in the United States. These countries share similar perspectives on preservation and heritage, although the approaches these cities have taken to address municipal archaeology reveals considerable diversity. The case studies highlight how these innovative partnerships have developed, and explain how they function within local government. Engaging with the political sphere to advocate for and conduct archaeology requires creativity, flexibility, and the ability to develop collaborative partnerships. How these archaeological partnerships benefit the community is a vital part of the equation. Heritage and tourist benefits are discussed. Economic challenges during downturns in the economy are analyzed. The book also examines public outreach programs and the grassroots efforts to protect and preserve a community's archaeological heritage.

​Sherene Baugher, Ph.D., was the first City Archaeologist for New York City (1980-1990).  Since 1991, she has been a professor at Cornell University affiliated with Cornell’s Departments of Landscape Architecture, City and Regional Planning, and the Cornell Institute of Archaeology and Material Studies.  Her research on class, ethnicity, gender, and inequality focuses on 18th and 19th century sites with a special focus on New York sites.  She has co-edited two other books for Springer, Archaeology and Preservation of Gendered Landscapes (2010) and Past Meets Present: Archaeologists Partnering with Museum Curators, Teachers, and Community Groups (2007).

Douglas R. Appler, Ph.D., AICP, is an Assistant Professor in the Department of Historic Preservation at the University of Kentucky.  He is a former practicing city planner whose research emphasizes innovation in the relationship between local government and historic resources.  He received his Ph.D. in City and Regional Planning from Cornell University, and is a member of the American Institute of Certified Planners.

William Moss coordinates municipal archæological heritage management for the City of Québec, a UNESCO World Heritage site. He was appointed Chief Archaeologist, the first position of its kind in Canada, in 1985. More than two hundred projects carried out under his supervision have generated an important body of knowledge that has been widely communicated to the city’s inhabitants, as well as contributing to the conservation and development of numerous sites. Laval University¸ where Mr. Moss is a sessional lecturer, awarded him an honorary Ph.D. for his contribution to the knowledge of, the protection and the development of Québec City’s rich archæological heritage.