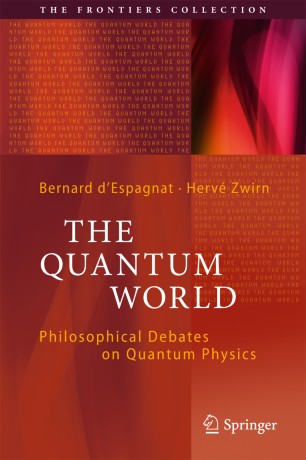 In this largely nontechnical book, eminent physicists and philosophers address the philosophical impact of recent advances in quantum physics. These are shown to shed new light on profound questions about realism, determinism, causality or locality. The participants contribute in the spirit of an open and honest discussion, reminiscent of the time when science and philosophy were inseparable. After the editors’ introduction, the next chapter reveals the strangeness of quantum mechanics and the subsequent discussions examine our notion of reality. The spotlight is then turned to the topic of decoherence. Bohm’s theory is critically examined in two chapters, and the relational interpretation of quantum mechanics is likewise described and discussed. The penultimate chapter presents a proposal for resolving the measurement problem, and finally the topic of loop quantum gravity is presented by one of its founding fathers, Carlo Rovelli.

The original presentations and discussions on which this volume is based took place under the auspices of the French “Académie des Sciences Morales et Politiques”. The book will appeal to everybody interested in knowing how our description of the world is impacted by the results of the most powerful and successful theory that physicists have ever built.

Bernard d’Espagnat (22 August 1921 - 1 August 2015), after spending time at the École Polytechnique and a few years at the French National Centre for Scientific Research (CNRS) with stints abroad, contributed to the creation of the theoretical physics research group at CERN (Geneva) and conducted research in elementary particles physics. Professor at the Paris-Orsay University, he continued his research in this field while developing an interest in the conceptual foundations of quantum mechanics. He organized workshops on this theme in 1970 in Varenna (Italy) and in 1976 in Erice (Sicily) (the latter in collaboration with John Bell) focusing mainly on quantum entanglement and non-locality, which was then in the process of being verified experimentally, and which he subsequently investigated further. His main works are: Conceptual Foundations of Quantum Mechanics (W.A. Benjamin, 1971), À la recherche du réel. Le regard d’un physicien (Gauthier-Villars, 1979), Un atome de sagesse (Seuil, 1982), Le Réel voilé. Analyse des concepts quantiques (Fayard, 1994), Traité de physique et de philosophie (Fayard, 2002). He was a member of the Institute Académie des Sciences Morales et Politiques.
Hervé Zwirn, is a physicist and epistemologist, and a senior researcher at the CNRS (the French National Centre for Scientific Research). He is a visiting researcher at the Institute of History and Philosophy of Sciences and Technology (IHPST, Paris1, CNRS & ENS), at the Research Centre for Applied Maths (CMLA, CNRS & ENS Cachan) and at the Paris Interdisciplinary Energy Research Institute (LIED, CNRS & Paris 7). His research focuses mainly on the interpretations of quantum mechanics and their philosophical consequences, on the axiomatic formalization of inference modes and on the behaviour of complex systems. He also proposed a model of the theoretical decision-making process using the mathematical framework of quantum mechanics. He is executive director of the Consortium de Valorisation Thématique de l'Alliance Athéna (UMS 3599, CNRS & Paris4), responsible for the commercial development and dissemination of the research output in social sciences of French laboratories. His main books are: Les Limites de la connaissance (Odile Jacob, 2000), Les Systèmes complexes (Odile Jacob, 2006), Philosophie de la mécanique quantique (with Jean Bricmont, Vuibert, 2009), Qu’appelle-t-on aujourd’hui les sciences de la complexité? (with Gérard Weishbuch, Vuibert, 2010).