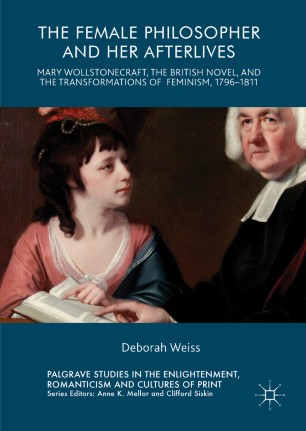 The Female Philosopher and Her Afterlives

Mary Wollstonecraft, the British Novel, and the Transformations of Feminism, 1796-1811

This book argues that the female philosopher, a literary figure brought into existence by Mary Wollstonecraft’s A Vindication of the Rights of Woman, embodied the transformations of feminist thought during the transition from the Enlightenment to the Romantic period.  By imagining a series of alternate lives and afterlives for the female philosopher, women authors of the early Romantic period used the resources of the novel to evaluate Wollstonecraft’s ideas and legacy. This book examines how these writers’ opinions converged on such issues as progress, education, and ungendered virtues, and how they diverged on a fundamental question connected to Wollstonecraft’s life and feminist thought:  whether the enlightened, intellectual woman should live according to her own principles, or sacrifice moral autonomy in the interest of pragmatic accommodation to societal expectations.

Deborah Weiss is Associate Professor in the Department of English at the University of Alabama, USA. She is a specialist in the long eighteenth century with research interests in the interconnections among gender, economics, education, and Enlightenment.  Her articles have appeared in Eighteenth-Century Fiction, Studies in Romanticism, The Journal of Eighteenth-Century Studies, and Studies in the Novel.

“The Female Philosopher and Her Afterlives is … not only an intriguing piece of literary analysis, it also represents a modest but noteworthy intervention in literary history.” (Laura Kirkley, European Romantic Review, Vol. 30 (4), 2019)
Buy options