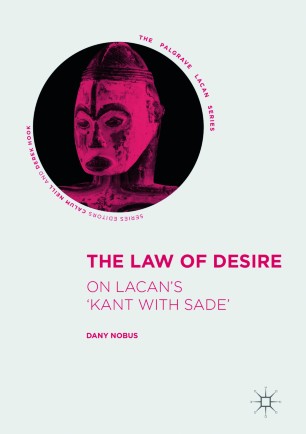 The Law of Desire

On Lacan’s 'Kant with Sade’

This book offers the first comprehensive discussion of Lacan’s Kant with Sade, an essay widely recognised as one of his most important and difficult texts. Here, the reader will find a detailed roadmap for each section of the essay, including clarifications of the allusions, implicit borrowings and references in Lacan’s text, unique insights into the essay’s publication history, and a critical assessment of its reception. The author expertly defines key terms, explains complex theoretical arguments, and contextualizes the work within a larger philosophical discourse. No prior knowledge of Lacan, Kant or Sade is assumed, allowing both newcomers and those who are well-versed in psychoanalysis, philosophy, and literary criticism to benefit from the book. This engaging book clears the path for a long overdue re-discovery and a proper appreciation of one of Lacan’s most challenging works, inspiring a renewed debate on the significance of Lacanian psychoanalysis for moral philosophy and literary theory.

Dany Nobus is Professor of Psychoanalysis at Brunel University London, and Chair of the Freud Museum London, UK. He is the author of Jacques Lacan and the Freudian Practice of Psychoanalysis, and, with Malcolm Quinn, Knowing Nothing, Staying Stupid: Elements for a Psychoanalytic Epistemology, alongside numerous papers on the history, theory and practice of psychoanalysis.

“Dany Nobus has met the challenge—how to make Lacan’s most opaque essay, the notorious “Kant with Sade,” transparent—and has succeeded. This alert and lucid book gives all its due to one of Lacan’s most ignored “writings,” his systematic confrontation of Kant’s and Sade’s philosophies. Never flattening the densely allusive text, Nobus unpacks it slowly, showing why Lacan could quip that he had turned Kant into “a flower of sadism”—thanks to him those Flowers of Evil sprout into a whole bunch of heady and exhilarating speculations.” (Jean-Michel Rabaté, Professor of English and Comparative Literature, University of Pennsylvania)

“Dany Nobus has achieved something that I would have thought impossible: he has taken what is arguably the most difficult text in Lacan’s Écrits, and—by dint of his well-known perspicacity and a close study of thousands of pages of Sade’s work, and hundreds more by Kant, Bataille, Klossowski, and numerous others—unfolded it step-by-step so that we ordinary mortals can get a decent grasp on it. He has even convincingly criticized my own published translation of Kant with Sade, forcing me to rethink and revise a text I worked so hard on. I couldn't recommend his book more highly!” (Bruce Fink, Lacanian analyst, translator of several works by Lacan, and author of numerous books on Lacan)