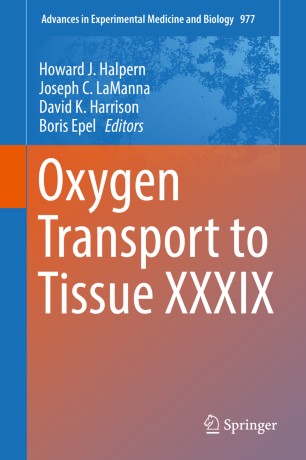 Part of the Advances in Experimental Medicine and Biology book series (AEMB, volume 977)

Howard J. Halpern  is Professor of Radiation and Cellular Oncology at the University of Chicago and Director, NIH Center for Electron Paramagnetic Resonance (EPR) Imaging In Vivo Physiology.  Dr. Halpern is both a physicist, supporting a graduate student as a member of the Committee of Medical Physics and a physician training Radiation Oncology residents.  His principle research focus is the application of EPR imaging for near absolute pO2 image formation.

Joseph C. LaManna is the Jeanette M. and Joseph S. Silber Professor of Brain Sciences at the Case Western Reserve University School of Medicine, Department of Physiology & Biophysics. He is the former chair of the Department of Anatomy at CWRU.  He is a Past President of The Federation of American Societies for Experimental Biology (FASEB), and Secretary of the International Society for Cerebral Blood Blow and Metabolism. He has published over 250 papers on the topic of oxygen and energy metabolism, especially in the field of brain blood flow and metabolism. He has been a member of the International Society for Oxygen Transport to Tissue since 1976, serving as President of the ISOTT in 2009. In 2016 he became the editor in Chief of the ISOTT proceedings.

David Harrison is CEO of Microvascular Measurements and acts as honorary Senior Scientific Consultant for Oroboros Instruments (Innsbruck, Austria). In this capacity he has recently been responsible for the development of lightguide spectrophotometry for the continuous measurement of cytochrome redox state in mitochondria during high resolution respirometry. Prior to this, he was Head of the Durham Unit of the Regional Medical Physics Department and Honorary Senior Lecturer in Medical Physics, Institute of Cellular Medicine, Newcastle University, UK until retiring from the NHS in 2009. He is author or co-author of over 130 publications, mainly in the field of blood flow and oxygen transport to tissue. He has been a member of ISOTT for over 30 years including being President in 1996. Since 2004 he has been Scientific Editor of the “Oxygen Transport to Tissue” volumes.

Boris Epel was awarded his Ph.D. in physics in Kazan Federal University, Russia in 1999. He did his post-doctoral training in Weizmann Institute of Science, Israel and in the Max-Plank Institute for Bioinorganic Chemistry. Currently Boris Epel is a Research Professor in the Department of Radiation and Cellular Oncology and scientific manager of the Center for EPR imaging in vivo Physiology. The major focus of research is application of in vivo oxygen imaging to the improved radiation treatment of cancer. Boris Epel has been a member of the International Society for Oxygen Transport to Tissue since 2015.​