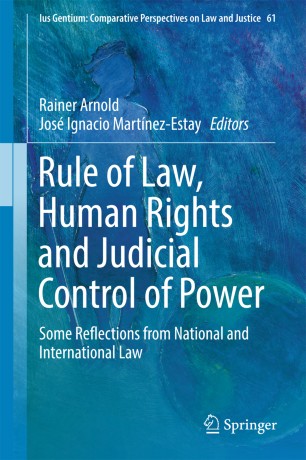 Rule of Law, Human Rights and Judicial Control of Power

Some Reflections from National and International Law

Judicial control of public power ensures a guarantee of the rule of law. This book addresses the scope and limits of judicial control at the national level, i.e. the control of public authorities, and at the supranational level, i.e. the control of States. It explores the risk of judicial review leading to judicial activism that can threaten the principle of the separation of powers or the legitimate exercise of state powers. It analyzes how national and supranational legal systems have embodied certain mechanisms, such as the principles of reasonableness, proportionality, deference and margin of appreciation, as well as the horizontal effects of human rights that help to determine how far a judge can go. Taking a theoretical and comparative view, the book first examines the conceptual bases of the various control systems and then studies the models, structural elements, and functions of the control instruments in selected countries and regions. It uses country and regional reports as the basis for the comparison of the convergences and divergences of the implementation of control in certain countries of Europe, Latin America, and Africa. The book’s theoretical reflections and comparative investigations provide answers to important questions, such as whether or not there are nascent universal principles concerning the control of public power, how strong the impact of particular legal traditions is, and to what extent international law concepts have had harmonizing and strengthening effects on internal public-power control.