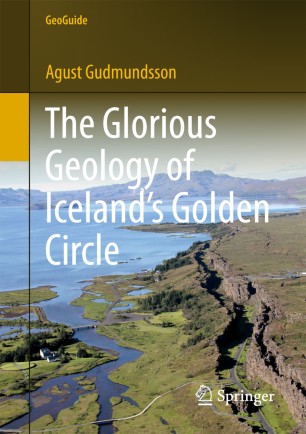 This is the first book describing the glorious geology of Iceland’s Golden Circle and four additional excursions:(1) the beautiful valleys and mountains of the fjord of Hvalfjördur, (2) the unique landscape and geothermal fields of the Hengill Volcano, (3) the explosion craters, volcanic fissures, and lava fields of the Reykjanes Peninsula, and (4) the volcanoes (Hekla, Eyjafjallajökull, Katla), waterfalls, sandur plains, and rock columns of South Iceland. The Golden Circle offers a unique opportunity to observe and understand many of our planet’s forces in action. These forces move the Earth’s tectonic plates, rupture the crust, and generate earthquakes, volcanic eruptions, channels for rivers and waterfalls, and heat sources for hot springs and geysers. The Golden Circle includes the famous rifting and earthquake fracture sites at Thingvellir, the hot springs of the Geysir area, the waterfall of Gullfoss, and the Kerid volcanic crater. As the book is primarily intended for people with no background in geosciences, no geological knowledge is assumed and technical terms are avoided as far as possible (those used are explained in a glossary). With more than 240 illustrations – mostly photographs – explaining geological structures and processes, it is also a useful resource for geoscientists.

Agust Gudmundsson was a volcanologist at the Nordic Volcanological Institute, University of Iceland, for many years, before being appointed to the Chair of Hydrogeology of Solid Rocks at the University of Bergen (Norway) and subsequently the Chair of Structural Geology and Geodynamics at the University of Göttingen (Germany). A leading volcanologist and structural geologist, as well as being editor of many earth-science journals and a member of the European Academy (Academia Europaea), Gudmundsson holds a University of London Chair of Structural Geology at Royal Holloway (United Kingdom). Gudmundsson has been a guide on many geological excursions in Iceland, both for geoscientists as well as for general visitors, including all those described in the book.

“This travel guide in Springer’s ‘GeoGuide’ series is an excellent companion for exploring Iceland’s iconic geological features, all accessible within a day’s drive of the capital, Reykjavik. Its compact size, water and dirt resistant cover, and sturdy binding are all designed for rigorous outdoor use. … The book is profusely illustrated with maps, diagrams, and an abundance of color photographs of geological features. … Highly recommended. All readers.” (W. L. Cressler III, Choice, Vol. 55 (12), August, 2018)
Buy options