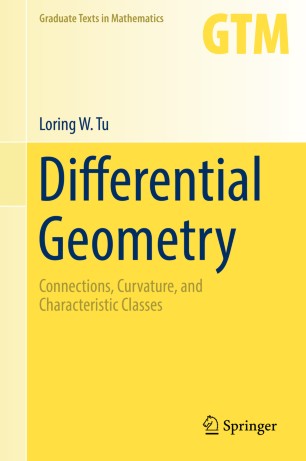 This text presents a graduate-level introduction to differential geometry for mathematics and physics students. The exposition follows the historical development of the concepts of connection and curvature with the goal of explaining the Chern–Weil theory of characteristic classes on a principal bundle. Along the way we encounter some of the high points in the history of differential geometry, for example, Gauss' Theorema Egregium and the Gauss–Bonnet theorem. Exercises throughout the book test the reader’s understanding of the material and sometimes illustrate extensions of the theory. Initially, the prerequisites for the reader include a passing familiarity with manifolds. After the first chapter, it becomes necessary to understand and manipulate differential forms. A knowledge of  de Rham cohomology is required for the last third of the text.

Prerequisite material is contained in author's text An Introduction to Manifolds, and can be learned in one semester. For the benefit of the reader and to establish common notations, Appendix A recalls the basics of manifold theory. Additionally, in an attempt to make the exposition more self-contained, sections on algebraic constructions such as the tensor product and the exterior power are included.

Loring W. Tu was born in Taipei, Taiwan, and grew up in Taiwan, Canada, and the United States. He attended McGill and Princeton as an undergraduate, and obtained his Ph.D. from Harvard University under the supervision of Phillip A. Griffiths. He has taught at the University of Michigan, Ann Arbor, and at Johns Hopkins University, and is currently Professor of Mathematics at Tufts University. An algebraic geometer by training, he has done research at the interface of algebraic geometry, topology, and differential geometry, including Hodge theory, degeneracy loci, moduli spaces of vector bundles, and equivariant cohomology. He is the coauthor with Raoul Bott of Differential Forms in Algebraic Topology and the author of An Introduction to Manifolds.

“The textbook is a concise and well organized treatment of characteristic classes on principal bundles. It is characterized by a right balance between rigor and simplicity. It should be in every mathematician's arsenal and take its place in any mathematical library.” (Nabil L. Youssef, zbMATH 1383.53001, 2018)
Buy options