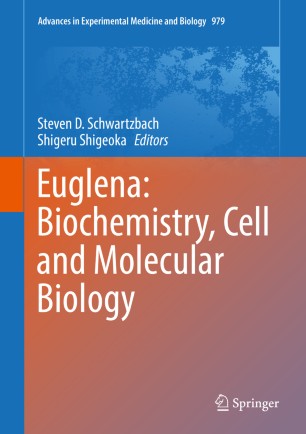 Part of the Advances in Experimental Medicine and Biology book series (AEMB, volume 979)

This much-needed book is the first definitive volume on Euglena in twenty-fire years, offering information on its atypical biochemistry, cell and molecular biology, and potential biotechnology applications. This volume gathers together contributions from well-known experts, who in many cases played major roles in elucidating the phenomenon discussed. Presented in three parts, the first section of this comprehensive book describes novel biochemical pathways which in some instances have an atypical subcellular localization. The second section details atypical cellular mechanisms of organelle protein import, organelle nuclear genome interdependence, gene regulation and expression that provides insights into the evolutionary origins of eukaryotic cells. The final section discusses how biotechnologists have capitalized on the novel cellular and biochemical features of Euglena to produce value added products. Euglena: Biochemistry, Cell and Molecular Biology will provide essential reading for cell and molecular biologists with interests in evolution, novel biochemical pathways, organelle biogenesis and algal biotechnology. Readers will come away from this volume with a full understanding of the complexities of the Euglena as well as new realizations regarding the diversity of cellular processes yet to be discovered.

Steven D. Schwartzbach is a Professor in the Department of Biological Sciences, University of Memphis.  He was introduced to the fascinating world of  Euglena while completing his Ph. D thesis under the direction of the late Dr. Jerome A. Schiff.  For the past forty years, first at the University of Nebraska-Lincoln and more recently at the University of Memphis, his laboratory has explored the cell and molecular biology of Euglena.  The focus of this research has been nuclear chloroplast genome interactions, regulation of gene expression, organelle biogenesis and protein trafficking to the Euglena plastid.  His Euglena research has led to brief flirtations in the fields of immunology and parasitology.  He has published over 80 journal articles, book chapters and reviews.

Shigeru Shigeoka is Professor, Department of Advanced Bioscience, and Dean, Faculty of Agriculture, Kindai University, Japan.  He is presidents of The Vitamin Society of Japan (2013~2017) and Euglena Research Association of Japan (2006~).

He completed his PhD thesis “Metabolism and physiological function of L-ascorbic acid in Euglena gracilis z” supported by the late professor Shozaburo Kitaoka in 1980.  Thereafter, his research has primarily been aimed at understanding the biochemical and molecular basis of responses against environmental stresses and photosynthetic carbon metabolism in plant and algal cells, with more recent work focusing on improving growth and environmental stress tolerance of plant and algal cells by molecular engineering.  To date, he has authored and co-authored over 270 technical articles, which include peer-reviewed journal, international patents, and book chapters.

He has won several prestigious awards which include Award of the Vitamin Society of Japan（2004) and the Japan Bioscience, Biotechnology and Agrochemistry Society Award (2013).