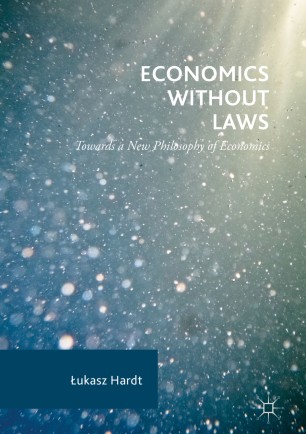 Towards a New Philosophy of Economics

This book offers a vision of economics in which there is no place for universal laws of nature, and even for laws of a more probabilistic character. The author avoids interpreting the practice of economics as something that leads to the formulation of universal laws or laws of nature. Instead, chapters in the book follow the method of contemporary philosophy of science:  rather than formulating suggestions for practicing scientists of how they should do research, the text describes and interprets the very practice of scientific research. This approach demonstrates how economists can explain economic phenomena not by subsuming them under general laws, but rather by building models of these phenomena,  by referring to causes, or even by investigating what is in the nature of given factors, events, or circumstances to produce.

Łukasz Hardt is Associate Professor of Economics at the University of Warsaw, Poland. In 2016, he was nominated by the President of Poland to the Monetary Policy Council.

“Economics without Laws engages the reader in a compelling narrative of how economics evolved from a law-centred to a model-based discipline, in which causal reasoning occupies a central role. Its goals are praise-worthy: debunking the myth of law-centrism for good, while opening up a new perspective on the field that acknowledges the role played in it by distinctively mathematical explanation. It is a “must-read” both for economists and for philosophers who can find here a further testimony of how much the two fields can learn from each other.” (Attilia Ruzzene, Witten/Herdecke University, Germany)

“Economics Without Laws is a real page-turner. The book makes two fundamental contributions to the philosophy of economics. First, it destroys the positivist conceit that economics was ever a science of universal generalisations. Through a detailed analysis of the writings of Smith, Ricardo, Mill, and Marshall, it argues persuasively that economists have regarded fundamental principles as approximate, context-dependent, and prone to exceptions right from the start. Second, it makes a range of novel proposals for for explaining economic phenomena when there are no laws: though causes, through models, through mathematical relations. Anyone interested in the foundations of economics should read it.” (Julian Reiss, Durham, UK)