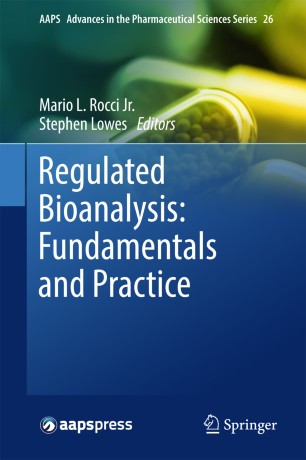 This book is intended to cover the fundamental and practical aspects of regulated bioanalysis. The editors are seeking leading scientists in the field to participate in the development of this book, which we envision as a “one of a kind” contribution to our field. The book is intended for students in the pharmaceutical sciences, chemistry, biology and related scientific disciplines interested in bioanalysis, as well as working scientists new to the field of regulated bioanalysis.  It will also serve as a primer for those experienced in the field. The depth of the book will seek to give its audience a solid foundation of knowledge in regulated bioanalysis which can be leveraged further with “hands on” experience.  Understanding that bioanalytical global regulations evolve, the book is not intended as a deep-dive into regulatory language nuances but rather to be an educational text on conducting defendable and auditable science to support modern bioanalysis.

Following an introduction to the topic by the editors, the book then covers “non-scientific” aspects of the topic area including the regulations governing this work, logistical and operational aspects of running a regulated bioanalytical laboratory and appropriate laboratory documentation. Next a description of the typically encountered types of bioanalytical samples, analytes and their attributes is provided. This information then sets the stage for a detailed discussion of the analytical platforms and assay types used in the regulated bioanalysis of small and large molecules. Also provided is a discussion of the different analytical phases of the bioanalytical process (i.e. method development including various strategies, pre-study validation and sample analysis).

Mario Rocci earned a Ph.D. in Pharmaceutics and a B.S. in Pharmacy from the State University of New York at Buffalo. He then joined Prevalere and developed the Pharmaceutical and Chemical Analysis business sector. Mario is well known throughout the pharmaceutical industry and has served as the President of the American Association of Pharmaceutical Scientists (AAPS), a professional society of over 13,000 members. He also serves on the Board of Pharmaceutical Sciences for the International Pharmaceutical Federation (FIP) and is Chairman of the Board of the Product Quality Research Institute (PQRI). Dr. Rocci has authored over 125 scientific publications and has extensive experience in the pharmaceutical sciences and the regulatory requirements of the FDA. He has over 25 years of experience in the pharmaceutical industry.
Stephen Lowes is Senior Scientific Direct of Bioanalysis and ADME Services at Q2 Solutions. He earned his Ph.D. in analytical chemistry from the Open University, United Kingdom. Dr. Lowes started his industrial career at VG Biotech in the UK that became the LC/MS instrument entity of Waters Corporation. He then joined the CRO group that became Advion and focused his career on regulated bioanalysis with particular emphasis on LC/MS. He has remained very connected on regulatory developments in bioanalysis and is a founding member of the Global Bioanalysis Consortium (GBC) and a past-chair of the AAPS Bioanalytical Focus Group. Dr. Lowes has more than 40 peer reviewed publications on bioanalysis and is a frequent speaker at national and international conferences.