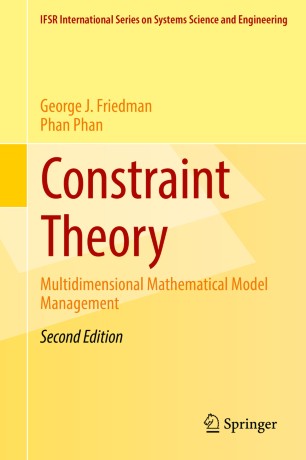 Packed with new material and research, this second edition of George Friedman’s bestselling Constraint Theory remains an invaluable reference for all engineers, mathematicians, and managers concerned with modeling. As in the first edition, this text analyzes the way Constraint Theory employs bipartite graphs and presents the process of locating the “kernel of constraint” trillions of times faster than brute-force approaches, determining model consistency and computational allowability. Unique in its abundance of topological pictures of the material, this book balances left- and right-brain perceptions to provide a thorough explanation of multidimensional mathematical models. Much of the extended material in this new edition also comes from Phan Phan’s PhD dissertation in 2011, titled “Expanding Constraint Theory to Determine Well-Posedness of Large Mathematical Models.”

"Groundbreaking work. ... Friedman's accomplishment represents engineering at its finest. ... The credibility of the theory rests upon the formal proofs which are interspersed among the illuminating hypothetical dialog sequences between manager and analyst, which bring out distinctions that the organization must face, en route to accepting Friedman's work as essential to achieve quality control in developing and applying large models." --John N. Warfield

​George Friedman is a Professor of Practice in the Astronautical Engineering Department of the Viterbi School of Engineering of the University of Southern California. He has developed and taught graduate courses in systems engineering with emphasis on the management of complexity and decision science. This book is the product of one of these courses. He has had over 45 years of experience in industry, retiring from the Northrop Corporation as their Corporate Vice President of Engineering and Technology. He worked on a wide variety of aerospace programs and served as a consultant to all branches of the Department of Defense, NASA, the National Science Foundation, and Department of Energy as well as to the NATO industrial advisory group. He was a founder of the International Council on Systems Engineering (INCOSE), served as its third president, was elected a fellow and is on the editorial board of INCOSE’s journal, Systems Engineering. He has also been a member of the Instit
ute of Electrical and Electronic Engineers (IEEE) since its formation from the IRE and AIEE, was elected a fellow and was the vice president for publications of the IEEE Transactions on Aerospace and Electronics Systems.  He received the Baker Prize for the best paper published by all societies of the IEEE in 1970 -- the subject of the paper was Constraint Theory.
Phan Phan is a Lecturer in the Astronautical Engineering Department of the Viterbi School of Engineering of the University of Southern California (USC).  He has assisted and taught graduate courses in systems engineering, systems management, lean operations and economic analysis. He has had over 36 years of technical and managerial experience in government, military and various industries, including oil & gas exploration, commercial and military aircraft, unmanned sensors, and major weapon systems. His industry assignments included Mobil Research & Development, Ge
neral Dynamics, Lockheed Aeronautical Systems, McDonnell Douglas and Boeing Integrated Defense Systems. As a registered Professional Engineer in California, he currently works as a reliability analyst with the Naval Surface Warfare Center -- Corona Division. He has also served in the U.S. Navy Reserve as an Engineering Duty Officer, attaining the rank of Captain, and currently assigned to Naval Sea Systems Command. His previous Navy assignments included Office of Naval Research/Naval Research Laboratory, Program Executive Office Integrated Warfare Systems, Naval Space & Warfare Systems Command, Mobile Mine Assembly Group, Naval Weapons Station Seal Beach and Naval Shipyard Long Beach. He received his B.S. in Engineering from the University of Alabama in Huntsville, Master of Engineering from the University of Texas at Arlington, MBA from California State University - Fullerton, M.S. in Systems Architecture & Engineering from USC, Master of Engineering Acoustics from the Naval Postgraduate School, and Ph.D. in Industrial & Systems Engineering from USC. The topic of his doctoral dissertation was “Expanding Constraint Theory to Determine Well-Posedness of Large Mathematical Models," the main contribution to the second edition of this book.

“The book contains many open problems and suggestions for further research. … The book is very useful for researchers in discrete mathematics and combinatorics, applied statisticians, coding theorists and signal processors, but also for graduate students interested in these fields of mathematics.” (Dean Crnković, zbMATH 1400.05002, 2019)
Buy options