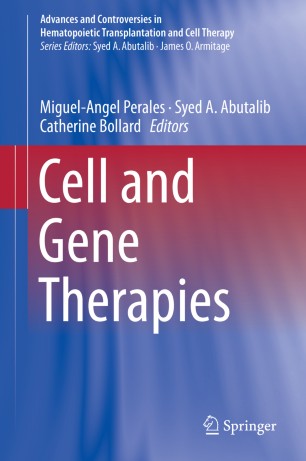 In this book, experts in the field express their well-reasoned opinions on a range of complex, clinically relevant issues across the full spectrum of cell and gene therapies with the aim of providing trainee and practicing hematologists, including hematopoietic transplant physicians, with information that is relevant to clinical practice and ongoing research. Each chapter focuses on a particular topic, and the concise text is supported by numerous working tables, algorithms, and figures. Whenever appropriate, guidance is provided regarding the availability of potentially high-impact clinical trials. The rapid evolution of cell and gene therapies is giving rise to numerous controversies that need to be carefully addressed. In meeting this challenge, this book will appeal to all residents, fellows, and faculty members responsible for the care of hematopoietic cell transplant patients. It will also offer a robust, engaging tool to aid vital activities in the daily work of every hematology and oncology trainee.

Miguel-Angel Perales, MD, is a Medical Oncologist and Deputy Chief of the Adult Bone Marrow Transplant Service at Memorial Sloan Kettering Cancer Center in New York, where he also serves as Director of the Adult Stem Cell Transplant Fellowship.  He is a Special Contributing Faculty Member at the Gerstner Sloan Kettering Graduate School at MSK and an Associate Professor of Medicine at Weill Cornell Medical College.  He received his medical degree from the Universite Libre de Bruxelles and performed post-doctoral research and clinical training at Tufts Medical Center in Boston and Memorial Sloan Kettering Cancer Center in New York.  He serves on the Board of Directors of the National Marrow Donor Program (NMDP).  He is a member of a number of scientific associations and a member of the Alliance for Clinical Trials in Oncology (former CALGB) Transplant Committee, the American Society for Blood and Marrow Transplantation (ASBMT) Educational Committee (co-Chair) and Committee on Practice Guidelines, and the National Marrow Donor Program (NMDP) System Capacity Initiative Working Group and Curriculum Sub-Group.  He is a Co-Chair of the Center for International Blood and Marrow Transplant Research (CIBMTR) Graft Sources and Manipulation Working Committee and serves on a number of ad-hoc taskforces for the CIBMTR and Blood and Marrow Transplantation Clinical Trials Network (BMT CTN).  His research interests include translational research in stem cell transplantation for hematologic malignancies, immune reconstitution, tumor immunology, and the development of cytokine and cellular therapies for cancer.  Dr. Perales serves as a reviewer for several study sections and journals, and has authored over 100 peer-reviewed manuscripts, editorials, reviews and book chapters.

Syed A. Abutalib, MD Assistant Director, Stem Cell Transplant and Cell Therapy Program Cancer Treatment Centers of America.
Syed Abutalib, M.D., is Assistant Director of FACT accredited Stem Cell Transplant and Cell Therapy program; he joined CTCA in 2008 as a hematologist/oncologist. Dr. Abutalib earned his medical degree from Dow Medical College in Karachi, Pakistan, and subsequently completed a residency in internal medicine at Cook County Hospital and a fellowship in Hematology/Oncology at the University of Illinois at Chicago. Board certified in medical oncology, and hematology, Dr. Abutalib specializes in benign hematology, malignant hematology and hematopoietic blood and marrow cell transplantation. While maintaining a rigorous schedule tending to his beloved patients, Dr. Abutalib makes it a priority to volunteer his outside time toward his other passion for continuing medical education – including speaking, writing, and association presentations.
Dr. Abutalib has been published in several peer-reviewed journals, including American Journal of Hematology, Current Pharmaceutical Biotechnology, and American Journal of Clinical Pathology and has written chapters for medical textbooks, including Acute Leukemias (2008), Evidence-Based Hematology (2008), Expert Hematology & Oncology Essentials (2014), Cancer Consult: Expertise for Clinical Practice (2014), and Clinical Manual for Blood & Marrow Transplantation (2016).
Dr. Abutalib is the editor of several books including, Cancer Consult: Expertise for Clinical Practice, Clinical Manual of Blood & Marrow Transplantation, and Concepts and Controversies in Hematopoietic Cell Transplantation. He is on the editorial board for Clinical Oncology News and is currently on the editorial board for The ASCO POST and contributes in the column “Expert Hematology Review”. Most recently, he has been selected to be a reviewer for the Journal “Blood Reviews”.

Catherine Bollard, MBChB, MD, FRACP, FRCPA, is Professor of Pediatrics and of Microbiology, Immunology, and Tropical Medicine, Director of the Program for Cell Enhancement and Technologies for Immunotherapy (CETI) and Chief, Division of Allergy and Immunology at the Children’s National Health System and The George Washington University School of Medicine and Health Sciences, Washington, DC, USA. She took up these positions in 2013, having previously been Professor of Pediatrics, Medicine, and Immunology and Director of the Pediatric Lymphoma Program at the Texas Children’s Cancer and Hematology Center and Baylor College of Medicine, Houston, TX. Dr. Bollard is Chair of the Non-Hodgkin Lymphoma Committee for the Children’s Oncology Group (COG) and is on the BMT CTN Steering Committee for the NCI and the NHLBI. She is President of the International Society for Cellular Therapy (ISCT) and is on the Board of Directors for the Foundation for the Accreditation of Cellular Therapy (FACT). Dr. Bollard was Co-Editor in Chief for the Journal of Pediatric Hematology/Oncologyfrom 2010 to 2014 and currently serves as an Associate Editor for the journals Blood and Cytotherapy. Her bench and translational research focuses on improving outcomes after hematopoietic stem cell and cord blood transplantation as well as the development of novel cell therapies for cancer and for patients with immune deficiencies.