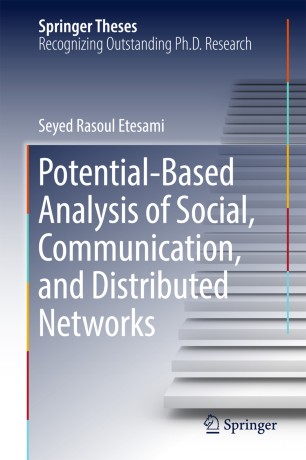 This work makes major contributions to the thriving area of social, communication, and distributed networks by introducing novel methodologies and tools toward the study of the evolutionary behaviors of these networks, as well as their computational complexity and rates of convergence. By departing from the classical approaches and results in the literature, this work shows that it is possible to handle more complex and realistic nonlinear models where either the traditional approaches fail or lead to weak results. The author also develops several easily implementable algorithms, delivering excellent performance guarantees while running faster than those that exist in the literature. The study undertaken and the approaches adopted enable the analysis of the evolution of several different types of social and distributed networks, with the potential to apply to and resolve several other outstanding issues in such networks.

Syed Rasoul Etesami, PhD, performed his thesis research at the University of Illinois at Urbana-Champaign, Department of Electrical and Computer Engineering, and is now affiliated with Princeton University, Electrical Engineering department. He is the first ever recipient of the CSL Dissertation Award, given to a graduate student in engineering whose PhD thesis makes major advances to a topic area.