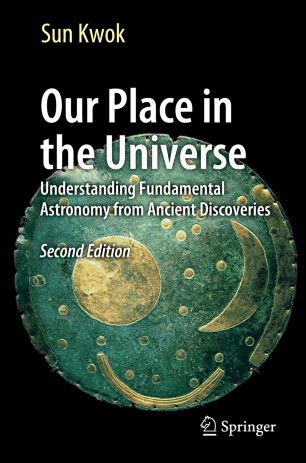 Our Place in the Universe

If you have ever wanted to understand the basic principles of astronomy and celestial movements, you should read this book. Using pictures of the sky observed from different places on Earth, as well as drawings of ancient astronomical methods and tools, Prof. Sun Kwok tells this story in an entertaining and fascinating way.

Since the beginning of human civilization, people have wondered about the structure of the cosmos and our place in the Universe.  More than 2,000 years ago, our ancestors knew that the seasons were unequal, the Earth was an unattached object floating in space, and stars existed that they could not see.  From celestial observations, they concluded that the Earth was round.  Using simple tools and mathematics, ancient astronomers accurately determined the sizes of the Earth and Moon, the distance to the Moon, and the lengths of the months and year.

With a clever device called the armillary sphere, Greek astronomers could predict the times of sunrise and sunset on any day of the year, at any place on Earth. They developed sophisticated mathematical models to forecast Mars’ motions hundreds of years into the future.

Find out how ancient observers achieved these remarkable feats. With minimal use of mathematics, this book retraces the footsteps of our ancestors, explains their intellectual journeys in simple terms, and explores the philosophical implications of these discoveries.

Prof. Kwok is a Chair Professor of Physics and Dean of Science at The University of Hong Kong. Previously, Prof. Kwok served as Faculty Professor of the University of Calgary in Calgary, Canada, and Director and Distinguished Research Fellow of the Institute of Astronomy and Astrophysics of Academia Sinica of Taiwan.

Professor Kwok is widely acknowledged as the world-leading expert in the study of planetary nebulae, a class of spectacular-looking objects formed near the end of a star's life. His theory on the origin of planetary nebulae has revolutionized our understanding of the death of Sun-like stars. More recently, he has found that planetary nebulae can rapidly synthesize large amount of complex organic compounds, as well as widely spreading them throughout the Milky Way Galaxy; a finding that has significant implications on the origin of life on Earth.

Prof. Kwok is the author of several books, including the best-selling Cosmic Butterflies published by Cambridge University Press in 2001, and Physics and Chemistry of the Interstellar Medium, a standard textbook used in many leading universities in the world.  His book Origin and Evolution of Planetary Nebulae (Cambridge, 2000) is regarded as the most authorative treatise of this subject.  His book Organic Matter in the Universe published by Wiley in 2011 was the first book on this new frontier of astrochemistry. His most recent book, Stardust: the cosmic seeds of life, was published by Springer in 2013.

Prof. Sun Kwok has served in many national and international bodies. He is the current President of Commission F3 (Astrobiology) of the International Astronomical Union (IAU).  He has previously served as President of IAU Commission 34 Interstellar Matter (2012-2015), chairman of IAU Planetary Nebulae Working Group (1994-2001), and as organizing committee member of IAU Astrochemistry Working Group.

“Each chapter concludes with a number of interesting, open questions, and there is a set of searching review exercises at the end of the book, followed by laboratory exercises involving direct observation or, more realistically, the use of readily available planetarium software. … This book can open our eyes to the phenomena around us and what we can learn from them. It will appeal not only to astronomers but also to inquisitive general readers, and is strongly recommended.” (Peredur Williams, The Observatory, April, 2018)
Buy options