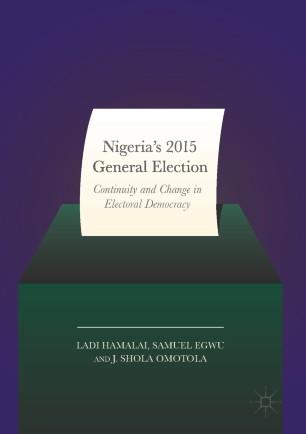 Continuity and Change in Electoral Democracy

This book examines the significance of the 2015 elections in consolidating Nigeria’s democracy, in the context of the difficulty of routinizing democracy since the attainment of nationhood in 1960 and the return to civil rule in May 1999, in particular. It offers a complete analysis of Nigeria’s electoral process, outlining how the dynamics of limited changes in the constitutional, institutional, attitudinal and behavioural frameworks that underpin electoral competition played out in the elections. The authors further examine the conduct and outcome of the 2015 elections against the background of the pattern of electoralism that had been established since the return to democracy in 1999. In doing so, they draw attention to the dialectics of continuity and change that have been thrown up by the elections and how the lessons learned can be used to build a more enduring democratic system. The book will be of interest to students and academics of political science, development studies, democratisation and election studies, and African government and politics.

Ladi Hamalai is Director-General of the National Institute for Legislative Studies (NILS), Nigeria. An Associate Professor, she holds a Doctorate Degree in Development Studies from the University of Sussex, UK. She lectured in the University of Maiduguri and Nigerian Defence Academy from 1982 to 2003.

Samuel Egwu is Professor of Political Science at the University of Jos, Nigeria. He previously worked as the Governance Adviser to the United Nations Development Programme in Nigeria. He has published extensively on governance in Nigeria. He was a member of the 2014 National Conference as a Kogi State delegate to chart a new political course for the country.

J. Shola Omotola is Professor of Political Science and Head of the Political Science Department, Federal University Oye-Ekiti, Ekiti State, Nigeria. He has a PhD in Comparative African Politics and Governance from the University of Ibadan, Nigeria. His primary research interests are in comparative African governance institutions, democratization and election studies, and legislative studies.