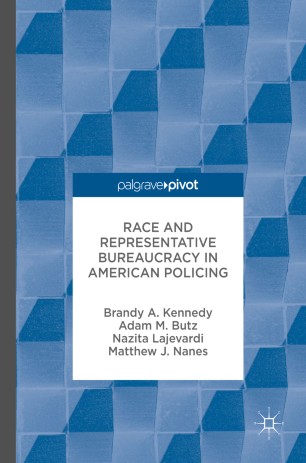 This book examines issues of race and policing through the lens of representative bureaucracy theory. According to representative bureaucracy theory, demographic correspondence between government employees and the local population can lead to more favorable outcomes for minority groups. It argues that police forces with higher minority composition will have more positive outcomes across measures such as fewer excessive force complaints and fewer fatal encounters with officers.  Additionally, the book asserts that more representative forces will demonstrate responsiveness and accountability by implementing policies such as citizen review boards for excessive force complaints. It does this by first providing a brief overview of issues surrounding race and policing in America, documenting racial representation occurring in local police forces nationwide, and exploring the potential causes and consequences of underrepresentation. It concludes by discussing the implications of our findings and offer potential policy remedies and solutions that local law enforcements can pursue in order to reduce minority underrepresentation and improve policing outcomes.

Brandy Kennedy is Associate Professor of Political Science and Public Administration in the Department of Government and Sociology at Georgia College and State University, USA. Her recent publications include articles in the Journal of Public Administration Research and Theory and Administration and Society.
Adam M. Butz is Assistant Professor in the Graduate Center for Public Policy and Administration at California State University, Long Beach, USA. His most recent publications include articles in Poverty & Public Policy, Evaluation Review, and the Journal of Policy Practice.
Nazita Lajevardi is a Postdoctoral Fellow at Uppsala University, Sweden. Prior works cover voter identification laws, felon disenfranchisement laws, media coverage, and constituent communications.
Matthew Nanes is a PhD candidate in the Department of Political Science at the University of California, San Diego, USA. His research has been published in Comparative Political Studies.