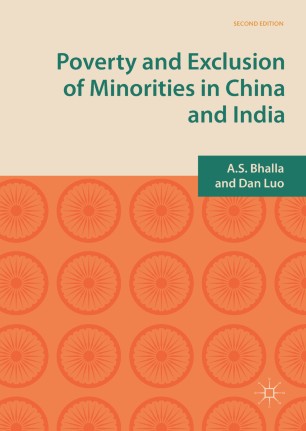 Poverty and Exclusion of Minorities in China and India

This book, a second edition, includes new data from the 2011 Census of India, the 2010 Census of India and NSS reports on consumer expenditure (2011-12), health and education (2014) to examine the latest understanding of poverty in China and India, and how that connects with minorities. Poverty has generally become less acute in both China and India, thanks to an impressively rapid growth especially between 2010 and 2015 when the rest of the world including the US and the EU slowed down following the economic recession of 2008. But the issues of income and non-income inequalities (especially malnutrition in India), marginalization and social exclusion remain as acute as ever in both countries.
As well as the use of new primary material in every chapter, the book also critically examines new relevant studies and responds to the global perspective of the minority issues. From the continuation of global terrorism and civil wars in Libya and Syria, to the Arab Spring and its fading, the persistence of conflicts in Afghanistan and Iraq, and the emergence of Islamic fundamentalism and the Islamic State (ISIS). As the book is mainly about Muslim minorities, these events have global bearing about their treatment and perceptions about them.