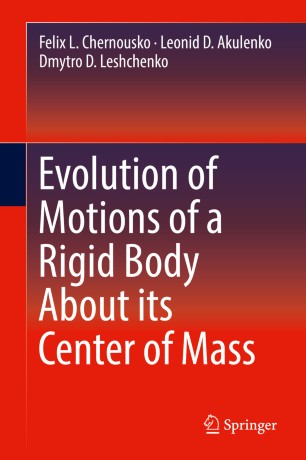 The book presents a unified and well-developed approach to the dynamics of angular motions of rigid bodies subjected to perturbation torques of different physical nature. It contains both the basic foundations of the rigid body dynamics and of the asymptotic method of averaging. The rigorous approach based on the averaging procedure is applicable to bodies with arbitrary ellopsoids of inertia. Action of various perturbation torques, both external (gravitational, aerodynamical, solar pressure) and internal (due to viscous fluid in tanks, elastic and visco-elastic properties of a body) is considered in detail. The book can be used by researchers, engineers and students working in attitude dynamics of spacecraft.

Professor Felix L. Chernousko is Principal Researcher of the Institute for Problems in Mechanics of the Russian Academy of Sciences in Moscow. He graduated from the Moscow Institute of Physics and Technology. His research covers various areas of mechanics, control theory, robotics, and applied mathematics.

Leonid D. Akulenko is Principal Researcher of the Institute for Problems in Mechanics of the Russian Academy of Sciences in Moscow, He graduated from the Department of Physics of the Moscow State University. His research covers various fields of applied mathematics, control theory, mechanics, mathematical physics and theory of oscillations.

Dmytro D. Leshchenko is the Professor and Head of the Chair of Theoretical Mechanics in Odessa State Academy of Civil Engineering and Architecture, Ukraine. His research covers theoretical mechanics, dynamics of a rigid body, optimal braking of rotations of a rigid body.