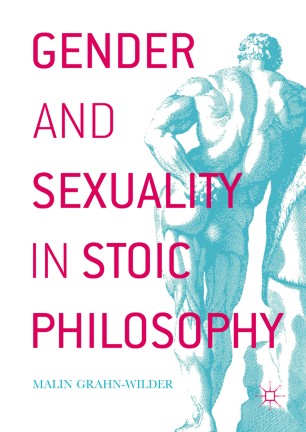 Gender and Sexuality in Stoic Philosophy

This book investigates the Ancient Stoic thinkers’ views on gender and sexuality. A detailed scrutiny of metaphysics, ethics and political philosophy reveals that the Stoic philosophers held an exceptionally equal view of men and women’s rational capacities.  In its own time, Stoicism was frequently called ‘ the manly school’ of philosophy, but this volume shows that the Stoics would have also transformed many traditional notions of masculinity. Malin Grahn-Wilder compares the earlier philosophies of Plato and Aristotle to show that the Stoic position often stands out within Ancient philosophy as an exceptionally bold defense of women’s possibilities to achieve the highest form of wisdom and happiness. The work argues that the Stoic metaphysical notion of human being is based on strikingly egalitarian premises, and opens new perspectives to Stoic philosophy on the whole.

Malin Grahn-Wilder is a postdoctoral researcher at the University of Jyväskylä and a teacher of gender studies at the University of Helsinki. She worked on this book while she was a visiting scholar at the Columbia University in the City of New York in 2016. She has formerly published articles on Ancient philosophy and gender in several anthologies, and she also works professionally as a dancer and dance educator.

“Malin Grahn-Wilder's Gender and Sexuality in Stoic Philosophy is an excellent book that provides an even better reason to teach the ancient Stoics. … This is a book that students in philosophy, classics, history, literature, sociology, and religious studies could read, and each would find it useful and enjoyable. Malin Grahn-Wilder has done a huge favor to all of us who teach ancient Greek and Roman philosophy.” (David O'Hara, Hypatia Reviews Online, 2020)
Buy options