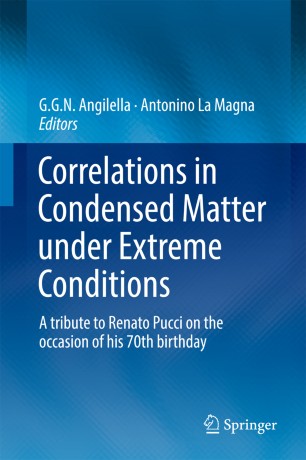 This book addresses a wide range of topics relating to the properties and behavior of condensed matter under extreme conditions such as intense magnetic and electric fields, high pressures, heat and cold, and mechanical stresses. It is divided into four sections devoted to condensed matter theory, molecular chemistry, theoretical physics, and the philosophy and history of science. The main themes include electronic correlations in material systems under extreme pressure and temperature conditions, surface physics, the transport properties of low-dimensional electronic systems, applications of the density functional theory in molecular systems, and graphene. The book is the outcome of a workshop held at the University of Catania, Italy, in honor of Professor Renato Pucci on the occasion of his 70th birthday. It includes selected invited contributions from collaborators and co-authors of Professor Pucci during his long and successful career, as well as from other distinguished guest authors.

Giuseppe G.N. Angilella is Associate Professor (with tenure) in the Physics of Matter at the Department of Physics, University of Catania, Italy. In 1994 Dr. Angilella gained an MSc in Physics from the University of Catania, where he went on to complete his PhD in 1999. In the same year he received a Young Researchers’ Award from the Italian Physical Society and in 2003 he received an award from the European High Pressure Research Group (EHPRG). He has served as secretary and chairman of EHRPG and as executive committee member and secretary for the International Association for Research and Technology at High Pressure (AIRAPT). He is the author of more than 100 articles in peer-reviewed journals and has acted as a reviewer for more than 70 articles published in American Physical Society journals as well as for numerous articles in other leading journals. He is co-author, with N.H. March, of the 2016 book Exactly Solvable Models in Many-Body Theory (World Scientific, Singapore). Antonino La Magna is senior researcher at the Institute for Microelectronics and Microsystems of the Italian National Research Council (IMM-CNR). Dr. La Magna received his MSc in Physics (cum laude) and his PhD in Physics at the University of Catania in 1992 and 1996, respectively. Since 1999 he has been a member of the IMM-CNR permanent staff with responsibility for the IMM-CNR computational team. He led the research group on advanced processes from 2010 to 2015 and was a member of the Scientific Council of IMM-CNR for the period 2009–2015. He is and has been coordinator and/or person responsible at the IMM-CNR for several international projects and research contracts. Dr. La Manga has authored over 250 publications in international journals in the fields of theoretical solid state physics, technological processes, and process and device simulations and has acted as a reviewer for more than 300 articles published in leading scientific journals (including APS, AIP, ACS, and RCS). He belongs to the European Science Foundation College of Review Panel Members and has participated in review panels for the evaluation of foreign scientific institution and EU/US projects.