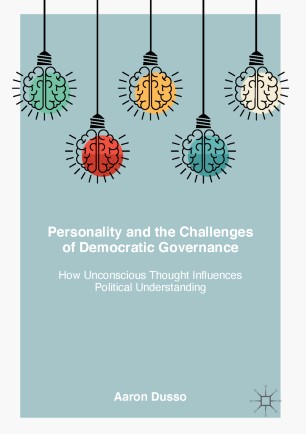 Personality and the Challenges of Democratic Governance

This book examines how the five-factor model of personality (also known as the Big Five)—extraversion, agreeableness, conscientiousness, emotional stability/neuroticism, and openness to experience—influence individuals’ ability to understand and engage in four areas of civic life. First, it documents how personality influences individuals when connecting abstract concepts like liberal or conservative to specific public policy preferences. Second, it demonstrates how understanding basic political facts is often conditional on these traits. Third, it tests the role that personality plays in citizens’ capacity to fulfill the basic demands that democratic governance places on them, such as connecting their own policy preferences to the correct political party. Fourth, it reveals how personality traits can blind people to the role government plays in their lives, while simultaneously causing them to vilify more visible beneficiaries of government programs. Ultimately, this book will engage both scholars and civic-minded individuals interested in understanding the hidden factors driving political behavior.