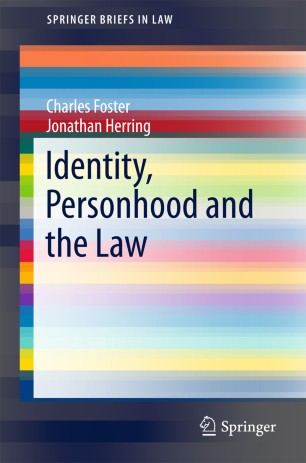 Identity, Personhood and the Law

This book is an examination of how the law understands human identity and the whole notion of ‘human being’. On these two notions the law, usually unconsciously, builds the superstructure of ‘human rights’. It explores how the law understands the concept of a human being, and hence a person who is entitled to human rights. This involves a discussion of the legal treatment of those of so-called "marginal personhood" (e.g. high functioning non-human animals; humans of limited intellectual capacity, and fetuses). It also considers how we understand our identity as people, and hence how we fall into different legal categories: such as gender, religion and so on.
The law makes a number of huge assumptions about some fundamental issues of human identity and authenticity – for instance that we can talk meaningfully about the entity that we call ‘our self’. Until now it has rarely, if ever, identified those assumptions, let alone interrogated them. This failure has led to the law being philosophically dubious and sometimes demonstrably unfit for purpose. Its failure is increasingly hard to cover up. What should happen legally, for instance, when a disease such as dementia eliminates or radically transforms all the characteristics that most people regard as foundational to the ‘self’? This book seeks to plug these gaps in the literature.