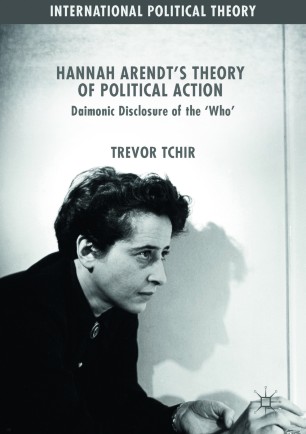 Daimonic Disclosure of the ‘Who'

This book presents an account of Hannah Arendt’s performative and non-sovereign theory of freedom and political action, with special focus on action’s disclosure of the unique ‘who’ of each agent. It aims to illuminate Arendt’s critique of sovereign rule, totalitarianism, and world-alienation, her defense of a distinct political sphere for engaged citizen action and judgment, her conception of the ‘right to have rights,’ and her rejection of teleological philosophies of history. Arendt proposes that in modern, pluralistic, secular public spheres, no one metaphysical or religious idea can authoritatively validate political actions or opinions absolutely. At the same time, she sees action and thinking as revealing an inescapable existential illusion of a divine element in human beings, a notion represented well by the ‘daimon’ metaphor that appears in Arendt’s own work and in key works by Plato, Heidegger, Jaspers, and Kant, with which she engages. While providing a post-metaphysical theory of action and judgment, Arendt performs the fact that many of the legitimating concepts of contemporary secular politics retain a residual vocabulary of transcendence. This book will be of interest not only to Arendt scholars, but also to students of identity politics, the critique of sovereignty, international political theory, political theology, and the philosophy of history.