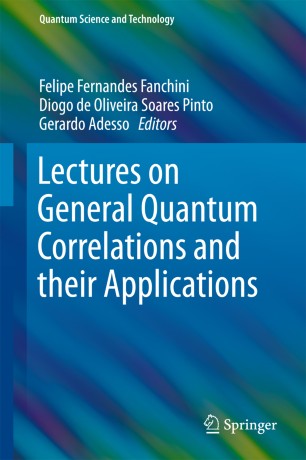 Lectures on General Quantum Correlations and their Applications

This book presents a distinctive way of understanding quantum correlations beyond entanglement, introducing readers to this less explored yet very fundamental aspect of quantum theory. It takes into account most of the new ideas involving quantum phenomena, resources, and applications without entanglement, both from a theoretical and an experimental point of view. This book serves as a reference for both beginner students and experienced researchers in physics and applied mathematics, with an interest in joining this novel venture towards understanding the quantum nature of the world.

Felipe Fanchini is an Assistant Professor at the São Paulo State University in Brazil. Physicist with experience in the field of quantum information and computation, mainly studying open quantum systems and all forms of quantum correlations.

Diogo de Oliveira Soares Pinto is an Assistant Professor at the São Carlos Institute of Physics, University of São Paulo in Brazil. His research interests are mainly in quantum information science. He has contributed to the characterization of quantum correlations in Nuclear Magnetic Resonance systems and in magnetic materials. His research further extends to information geometry, open system dynamics, and thermodynamics of nonequilibrium nanosystems.

Gerardo Adesso is a Full Professor at the University of Nottingham in the United Kingdom. His research interests are mainly in the fundamental investigation of the border between classical and quantum world. He has contributed to the characterisation of all forms of quantum correlations and their operational applications to quantum technologies. His research further extends to quantum optics, condensed matter physics, and thermodynamics.