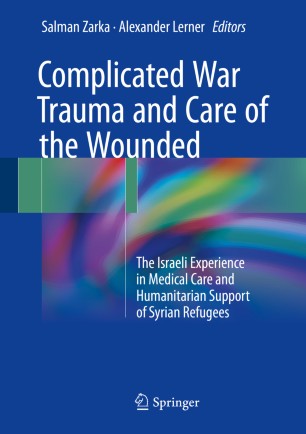 Complicated War Trauma and Care of the Wounded

This book presents carefully selected case reports that document some of the most important lessons learned at Ziv Medical Center, the northernmost Israeli hospital responsible for the medical care and support of wounded and patients from the Syrian civil war. The aim is to provide practitioners with new knowledge on effective ways of dealing with the emergencies encountered in the context of such conflicts. The case reports cover in particular the specialties of Trauma and Critical Care, Orthopedics, and Surgery, but also relate to Internal Medicine, Ophthalmology, Obstetrics and Gynecology, and Psychiatric Care. Some of the cases of trauma are of a nature not previously encountered by Western medicine, and include instances in which multidisciplinary care played a vital role. Featuring many informative illustrations, the book will be of value for all who work in emergency and military medicine and related disciplines, from novices to the more experienced.

Salman Zarka is General Director of Ziv Medical Center, Israel. Dr. Zarka, a physician graduated from the Technion Institute, served as a Colonel in the I.D.F. for more than 25 years in a variety of positions, the last of which was commander of the Military Health Services Department. During his I.D.F. service he constructed and become the Commander of the Israeli Field Hospital for Syrian wounded till it was closed. Dr. Zarka received a Master's degree in Public Health (MPH) from the Hebrew University, Jerusalem, and an additional Master's degree in Political Science from the University of Haifa. Since 2013 he has also been Senior Lecturer at Hebrew University Medical School and at University of Haifa Public Health School in Israel. His main research interests are Public Health, Infectious Diseases, and Military Medicine, including hospital operations in emergency situations. His studies of emergency hospitals caring for the Syrian wounded has enabled him to develop guidelines for hospital management in such situations that are now used in hospitals across Israel). He has frequently been involved in conference organization and has spoken on humanitarian aid to the Syrian causalities at conferences in Israel and the United States. Dr. Zarka is the author of almost 30 articles in peer-reviewed journals and organizer of number of international conferences.

Alexander Lerner is Clinical Professor in the Faculty of Medicine at Galilee, Bar-Ilan University, Israel and Director of the Department of Orthopaedic Surgery at Ziv Medical Center, Zefat, Israel.  After graduating cum laude from Vitebsk State Institute of Medicine in the former USSR in 1977, he worked as an orthopaedic surgeon and traumatologist in Belarus. From 1991 to 2010, he worked at Rambam Medical Center, Haifa, Israel, in the field of severe trauma to limbs and complex orthopaedic reconstructions, and served as Head of Complex Orthopaedic Care Service at Rambam Medical Center. He now has more than 30 years’ clinical experience in areas including reconstructive orthopaedic surgery, correction of limb deformations, treatment of non-unions and malunions, and management of severe trauma, including war injuries. He is an author of the previous Springer books Severe Injuries to the Limbs (2007), Armed Conflict Injuries to the Extremities (2011) and Orthopedics in Disasters (2016). Professor Lerner is the author of number chapters in Springer and Elsevier books, and dozens articles in peer-reviewed journals. He is a co-founder of the Asian Trauma Association and an editorial board member of Polytrauma (Russia) and the Chinese Journal of Traumatology. Organizer of five International meetings in field of high-energy trauma and complex orthopaedic care and reconstruction.

“This textbook appeared to set a new standard for subsequent collections. Its graphic colour images were injury-specific and arranged around a simplified format of detailed Case Presentation… . Zarka and Lerner provide a snapshot of an unusual cross-border and cross-cultural humanitarian exercise through a collection of medical and surgical cases of displaced victims of the Syrian conflict.” (Dave Edmond Lounsbury and Stephen P. Hetz, Medicine, Conflict and Survival, Vol. 34 (1), February, 2018)
Buy options