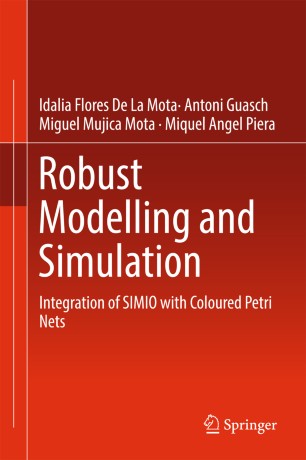 This book presents for the first time a methodology that combines the power of a modelling formalism such as colored petri nets with the flexibility of a discrete event program such as SIMIO. Industrial practitioners have seen the growth of simulation as a methodology for tacking problems in which variability is the common denominator. Practically all industrial systems, from manufacturing to aviation are considered stochastic systems. Different modelling techniques have been developed as well as mathematical techniques for formalizing the cause-effect relationships in industrial and complex systems. The methodology in this book illustrates how complexity in modelling can be tackled by the use of coloured petri nets, while at the same time the variability present in systems is integrated in a robust fashion. The book can be used as a concise guide for developing robust models, which are able to efficiently simulate the cause-effect relationships present in complex industrial systems without losing the simulation power of discrete-event simulation. In addition SIMIO’s capabilities allows integration of features that are becoming more and more important for the success of projects such as animation, virtual reality, and geographical information systems (GIS).

Dr Miguel Mujica Mota is a researcher and lecturer at the Aviation Academy of the Amsterdam University of Applied Sciences in the Netherlands. He was previously the sub director of the aviation studies at the Autonomous University of Barcelona. He holds a PhD and a MSc. in industrial informatics from the Autonomous University of Barcelona and a PhD and MSc. in operations research from the National University of Mexico, all obtained with the highest honors. Dr. Mujica Mota has given several courses in modelling, simulation methodologies and optimization in different countries for industrial and academic audiences. He has participated in several international projects in which simulation and optimization were the key factors for the success of them.
Dr. Mujica has been awarded with the Level C of the Mexican Council of Science and Technology where he also participates as a scientific evaluator for Latin America. He is the co-author of two books and numerous papers on simulation, operations research, aviation, manufacturing and logistics. His research interests lie in the use of simulation, modelling formalisms and heuristics for the optimization and performance analysis of aeronautical operations, manufacture and logistics.

Miquel Àngel Piera received his MSc (Control Engineering) from the University of Manchester Institute of Technology in 1990 and his PhD degree from the Autonomous University of Barcelona (Spain) in 1994. He participates in industrial research projects in the logistics and manufacturing field and at present he is Co-director of LogiSim, a Modelling and Simulation Institution sponsored and founded by the local government of Catalonia. Recently, he has published a modelling and simulation book that is being used for teaching in many Spanish universities.

Dr. Antoni Guasch is a research engineer focusing on modelling, simulation and optimization of dynamic systems, especially continuous and discrete-event simulation of industrial processes. He received his Ph.D. from the UPC in 1987. After a postdoctoral period at the State University of California (USA), he becomes a Professor of the UPC (www.upc.edu ). He is now Professor in the department of "Ingeniería de Sistemas, Automática e Informática Industrial" in the UPC and head of Simulation and Industrial Optimization at inLab FIB (http://inlab.fib.upc.edu/). Since 1990, Prof Guasch has lead more than 40 industrial projects related with modelling, simulation and optimization of nuclear, textile, transportation, car manufacturing, water, steel, pharmaceutical and banking processes. Dr. Guasch has also been the Scientific Co-ordinator and researcher in 7 scientific projects He has participated in 4 EU projects, with the role of partner leader in two of them. Dr. Guasch currently research projected is related to the development of algorithms for the optimal management of air resources for forest fire containmentDr. Idalia Flores de la Mota received a Master with honors, being awarded the Gabino Barreda Medal for the best average of her generation, in the Faculty of Engineering of the UNAM, where she also obtained her Ph.D. in Operations Research. Dr. Flores is a referee and a member of various Academic Committees at CONACYT as well as being a referee for journals such as Journal of Applied Research and Technology, the Center of Applied Sciences and Technological Development, UNAM and the Transactions of the Society for Modeling and Simulation International.  She is a full time professor at the Postgraduate Program at UNAM and her research interests lie in simulation and optimization of production and service systems.