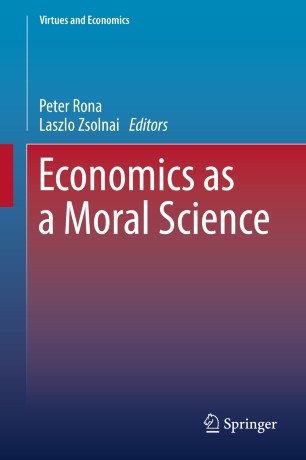 Economics as a Moral Science

Part of the Virtues and Economics book series (VIEC, volume 1)

The book is reclaiming economics as a moral science. It argues that ethics is a relevant and inseparable aspect of all levels of economic activity, from individual and organizational to societal and global. Taking ethical considerations into account is needed in explaining and predicting the behavior of economic agents as well as in evaluating and designing economic policies and mechanisms.

The unique feature of the book is that it not only analyzes ethics and economics on an abstract level, but puts behavioral, institutional and systemic issues together for a robust and human view of economic functioning. It sees economic “facts” as interwoven with human intentionality and ethical content, a domain where utility calculations and moral considerations co-determine the behavior of economic agents and the outcomes of their activities.

The book employs the personalist approach that sees human persons – endowed with free will and conscience – as the basic agents of economic life and defines human flourishing as the final end of economic activities. The book demonstrates that economics can gain a lot in meaning and also in analytical power by reuniting itself with ethics.

Peter Róna is Fellow of Blackfriars Hall, University of Oxford, where he teaches courses in economics and the philosophical foundations of the social sciences. He obtained his B.A. degree in economic history (cum laude) from the University of Pennsylvania and his law degree from Oxford University (First Class) in 1964. He was an associate of the Washington, D.C, law firm, Arnold & Porter and counsel to the US Department of Commerce before becoming the personal assistant of Lord Richardson, Governor of the Bank of England. He joined the Schroder Group in 1969 as the General Counsel of its operations in the United Sates, and became the President and Chief Executive of the IBJ Schroder Bank & Trust co. in 1985. In 2003 he joined the faculty of Eötvös Lóránd University where he taught public international law and in 2006 he was made an Honorary Professor there. His published articles include a study of the Euro and an examination of the philosophical foundations of economics.

Laszlo Zsolnai is professor and director of the Business Ethics Center at the Corvinus  University of Budapest. He is president of the European SPES Institute in Leuven, Belgium and Co-chair of the Future Earth Finance & Economics Knowledge and Action Network in Montreal. Laszlo Zsolnai’s recent books include The Palgrave Handbook of Spirituality and Business (2011. Houndmills, UK, New York, NY: Palgrave Macmillan), Beyond Self: Ethical and Spiritual Dimensions of Economics (2014. Peter Lang Academic Publishers, Oxford), The Spiritual Dimension of Business Ethics and Sustainability Management (2015, Springer), Post-Materialistic Business: Spiritual Value-Orientation in Renewing Management (2015, Palgrave) and Ethical Leadership. Indian and European Spiritual Approaches (2016, Palgrave-Macmillan).