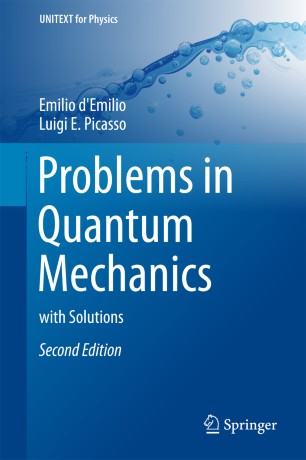 This second edition of an extremely well-received book presents more than 250 nonrelativistic quantum mechanics problems of varying difficulty with the aim of providing students didactic material of proven value, allowing them to test their comprehension and mastery of each subject. The coverage is extremely broad, from themes related to the crisis of classical physics through achievements within the framework of modern atomic physics to lively debated, intriguing aspects relating to, for example, the EPR paradox, the Aharonov-Bohm effect, and quantum teleportation. Compared with the first edition, a variety of improvements have been made and additional topics of interest included, especially focusing on elementary potential scattering. The problems themselves range from standard and straightforward ones to those that are complex but can be considered essential because they address questions of outstanding importance or aspects typically overlooked in primers. The book offers students both an excellent tool for independent learning and a ready-reference guide they can return to later in their careers.

Emilio d'Emilio was formerly a Researcher in the Department of Physics of Pisa University, Italy. He taught courses on studies in Physics at both Pisa and Siena University, including Analytical Mechanics, Elementary Quantum Mechanics, Intermediate Quantum Mechanics, and Quantum Electrodynamics. Dr. d'Emilio has published in international journals on gauge quantum field theories, phenomenology of elementary particles, and mathematical physics. He also collaborated with L.E. Picasso for the publication of Lectures in Quantum Mechanics (2016) with Springer.

E. Picasso was formerly Professor of Theoretical Physics at the University of Pisa, Italy. He taught courses on studies in both Physics and in Mathematics, including Introduction to Quantum Mechanics and Complements of Physics. Dr. Picasso has numerous publications to his name. He contributed to the Encyclopedia of Complexity and System Sciences (Springer) and is co-author, with E. d’Emilio, of the book Lectures in Quantum Mechanics (Springer 2016).